After four weeks of roaming in the backcountry and discovering the natural beauty of Argentina we switched to a bit of urban travel. University town with a rich history and colonial architecture. We were approaching the second biggest Argentinean city in a night sleeper coach of the Chevallier company (luxury Coche Cama). We were somewhat worried if we were going to find a taxi willing to take us downtown at 7 a.m. But, like in Mendoza, there were crowds waiting in front of the terminal and taxis were leaving one after another. 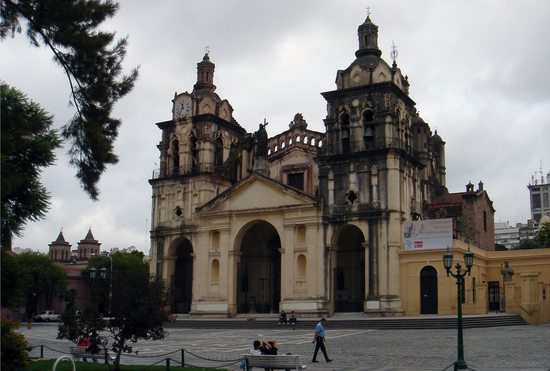 We failed to explain where we wanted to go and instead of the cheap youth hostal Cordoba Backpackers, the good man dropped us in front of two four-star hotels. Fortunately, there were vacancies in the hostal - quite unusual thing, especially for places recommended in Lonely Planet. We headed straight to Plaza San Martin for a rich breakfast in one of the cafés. Sunday wasn’t an ideal day for sightseeing. Many places of interest are closed, others have limited opening hours and the churches are crowded with people coming for Sunday mass.

We started the walk at Plaza San Martín, which dates back to 1577 (just four years after the city was founded by the Spanish conquistador Jerónimo Luis de Cabrera). The square originally designed for military parades, bullfighting and executions was planted with trees in mid 19th century and in 1916 a huge equestrian statue of General San Martín was erected. Opposite the statue there’s an old town hall – „Cabildo“, built between 1588–1785. Today it’s used for different cultural events. Entrance is free and it’s worth looking inside. Especially the beautiful patio with columns is worth seeing. The cathedral is just next to the Town Hall, across the Santa Catalina street, which separates the executive from the Church power. 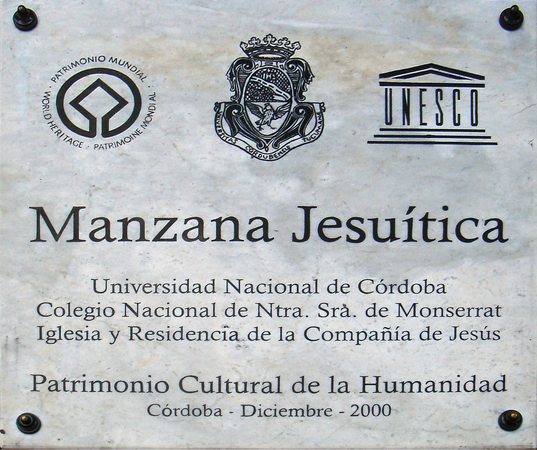 Iglesia Catedral is one of the largest symbols and dominants of Córdoba. Works began when the square was founded and lasted 200 years. Many architects were involved, so the building lacks some obvious unifying architectural elements. In the arcade before entering the church there are graves of Deán Funes and General Paz. A fine name for a soldier. Local native Brigadier General José María Paz y Haedo (1791–1854) is one of the distinguished Argentinean soldiers who fought in the wars for independence, so no pacifist at all. The morning Mass was underway, so we quickly left the crowded place.

Near the cathedral there’s a whole block called Manzana Jesuítica. The most important monuments include the Church of the Compañía de Jesús, said to be the oldest church in Argentina. From outside the church reminds a stone fortress and its interior hides a unique thing - ceiling in the form of an inverted ship's keel. Not surprisingly, it’s architect was a certain Padre Felipe Lamaire, originally shipbuilder. Due to the Sunday worship we couldn’t get in the private chapel - Capilla Doméstica.

In 1613 Fernando de Trejo y Sanabria supported the founding of the oldest university in the former Viceroyalty of the Río de la Plata (the second oldest university in South America). The National University of Córdoba has an amazing collection of books (the huge Jesuit library is considered a national treasure). As our guide explained, the way of these books from Europe to Córdoba was not easy. Jesuit pilgrims had first to overcome the Atlantic, then crossed the land in Panama to reach the Pacific, where they again embarked on ships for Lima from where they continued on foot and on mules to finally arrive at Córdoba! One of the rare documents is the authorization signed on 8 August 1621 by Pope Gregory XV, declaring that the University of Córdoba is officially recognized as educational institution. The most beautiful room of the old university is undoubtedly its Graduation Hall. Graduation ceremonies aren’t held here anymore, so as to avoid damage to the precious interior. The only thing still serving its purpose is the library – reading room of old books accessible to students of the university.

Still in the same compound there’s the last of the four sites put on the UNESCO World Heritage List in 2000 under the name of Manzana Jesuítica. It’s the Montserrat College, where many distinguished Argentineans did their studies. The College was founded in 1687 (Colegio/Convictorio de Nuestra Señora de Montserrat). The compound - university, college and church – made up for a unique religious, social and economic entity. Why economic? Together with the Jesuit complex in Córdoba five Jesuit ranches (estancias) located on the outskirts of the city were included in the UNESCO list. It is worth noting that, according to the guide, one of these economic parishes was designed by a Czech Jesuit architect.

The important thing for us was to buy coach tickets for Puerto Iguaçu. We’ve taken the trouble to find the cheapest of all the companies that offer this more than 20hour ride. All offers featured exclusively the best coaches of the „Coche Cama“ category, meaning there are not more than three seats in one row and so much room that you can easily fold the seatback to horizontal, including footrest. There’s a steward onboard distributing food, drinks…and everything like on the plane. We chose the Encon Express Company (175 pesos per person). 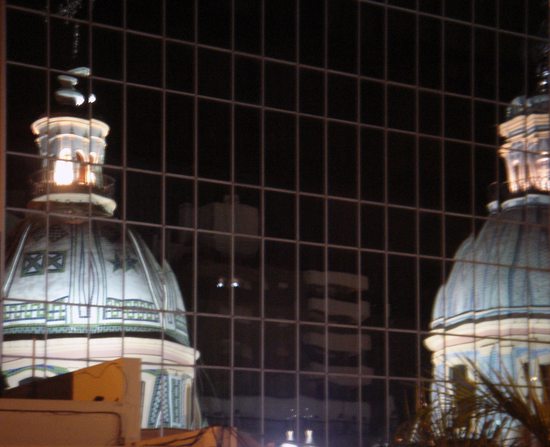 We spent the rest of the day roaming in the streets. Curiously and contrary to Lonely Planet, there’s a functional train station with a beautiful historic interior. According to the schedule, there were trains even for Buenos Aires! Throughout the morning there was no one in the streets, while in the afternoon it was almost impossible to find a free table in one of the great restaurants in the pedestrian zone.

Back in the early 18th century the Jesuits built an underground shrine called „Cripta Jesuítica“ which later served as crypt and crematorium. In the first half of the 19th century the building was abandoned and fell into oblivion. It was rediscovered only in 1989 when laying down a telephone cable..:-)

Before leaving for the bus terminal, we booked beds in Puerto Iguaçu and Buenos Aires, just to be on the safe side, since the season was in full swing. Youth hostal (Hostelling International) in Argentina have quite a sophisticated e-system, we paid in advance and were sure not to spend the last days sleeping under canvas.