Visit to the Iguazu National Park is first of all a visual experience. That’s why so many pictures in this article. 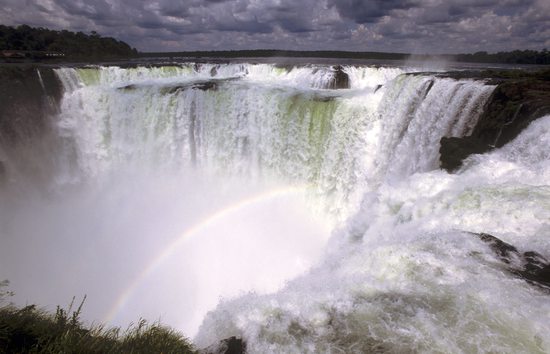 The journey by coach from Córdoba to Puerto Iguazú was just too long - more than 22 hours. Although the coach was very comfortable, we arrived at the Inn hostel in a rather lamentable state. The hostel was a fine surprise. It was a sort of luxury living that we were not used to. Huge lounge, generous spaces, swimming pool right in the front, palm trees and six separate cottages. We paid a bit more (40 per night per person) and so we stayed on the second floor of the cabin in air-conditioned bedroom for 4 people. Since we arrived around noon, we were going to have a look at the waterfalls the very day.

The local transport passes by the hostel, it’s regular and reliable. Yellow buses in the direction of Cataratas. This is a very convenient alternative to taxis. The bus will take you up to the Park entrance for just 4 pesos. At the gate we paid additional 40 pesos (price for foreigners, 14 pesos for locals). The good thing was that they advised us that if we wanted to come the following day, we could get a stamp to have the second visit for somewhat cheaper price. So, tomorrow we’ll pay only 20 pesos (again, price for foreigners, second day for locals only 7 pesos). At the information centre, we got some plans of the park and than headed for restaurants. The first restaurant in the park was full of wealthy German pensioners and we quickly abandoned it, the second one was the right choice. They had exactly the portions of meat that we needed – something like 500 to 700g. 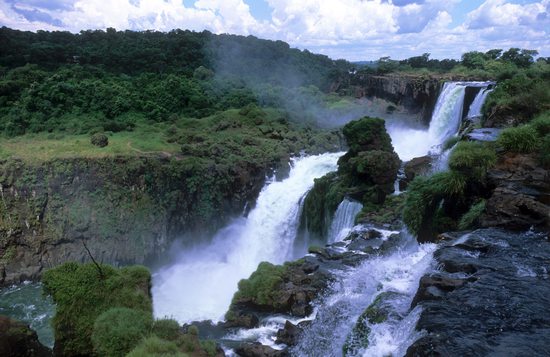 The trip could begin. We got on the tourist train (fare included in the entry fee) and had ourselves taken up to the most remote path - Paseo Garganta del Diablo. The 1100 metres long path took us slowly to the mightiest waterfall! Quiet level of the Iguazú river suddenly falls to a depth of 80 metres. Garganta del Diablo is saturated with water from three sides. When we stood at the observation deck, it was like we were standing under a shower. The Devil's Throat thunders like a volcano and spits out haze of fine drops of water! We watched the opposite, Brazilian, side through coloured stripes of rainbow. After a few seconds we were completely soaked. 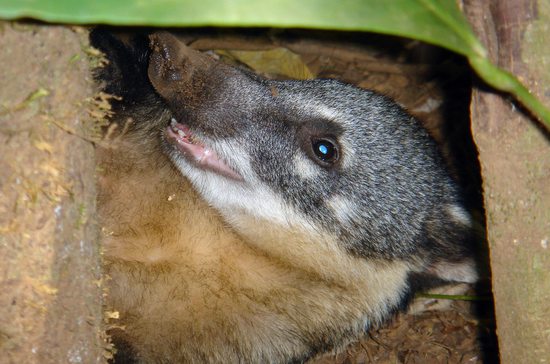 Slowly going back by the little train, so that we can explore another of the three paths. The upper trail is less than 700 m long – Circuito Superior runs along the edge of a long series of waterfalls. Salto Dos Hermanas, Salto Chico, Salto Ramírez... A beautiful sight. Some of the tourists on the lower path (Circuito Inferior) were moving on the river in fast boats making it deep into the waterfalls. Crazy enough – we’ll try it out tomorrow.

Legend about how the falls emerged

The first European who ever saw the Falls was Álvar Núñez Cabeza de Vaca in the 1542. He was probably the first to learn from the indigenous Guarani people the legend about the origin of the falls. Once upon a time, brave Guarani warrior Caroba escaped in a canoe with a young girl named Naipur, thus provoking wrath of a mighty forest god who was madly in love with the girl. Trying to stop Caroba, the angry god made the land under the river disappear. Naipur fell out of the canoe and turned into a rock. The poor Caroba was turned into a tree that overlooks the rock with his beloved one. 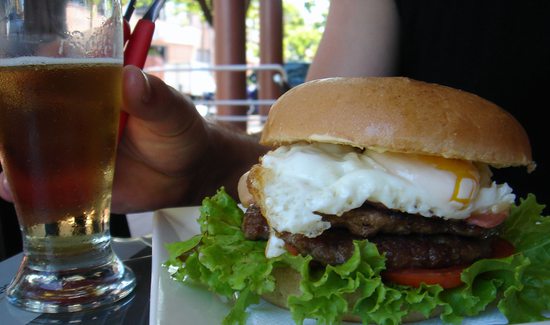 Due to the erosion the place where water falls down to the Devil’s Throat has moved by 23 kilometres since the origin of the waterfalls some 200 thousands years ago! Depending on the amount of water, visitors can observe from 160 to 260 waterfalls that fall to a depth of 80 metres. On average, 1500 cubic metres of water per second flow through the waterfalls. 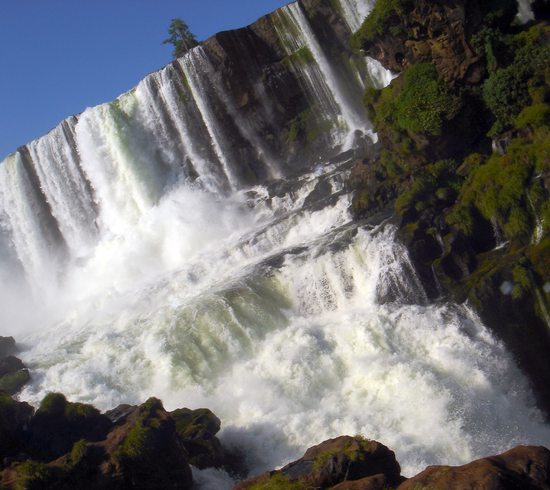 Coati Red (Nasua nasua) is approximately 50 cm big hog-nosed coon, whose nose can rotate up to 45 °, so that it can explore it’s surroundings. Besides a perfectly developed smell the coati have excellent sense of balance that they keep with the help of tail. Coati Red is an omnivore living in the rainforest areas (Venezuela and Colombia to Argentina), where the living conditions are particularly harsh. Coati feed themselves with fruits, tubers, soil fauna, bird eggs and youngs.

The attraction of the second day was the speed boat ride. We wrapped all the stuff in a waterproof bag. First the boat was circling around the falls and let us enjoy the light haze from one of the smaller falls. Then we headed right into the huge Salto San Martín. It was a hoot, people yelling and shrieking... 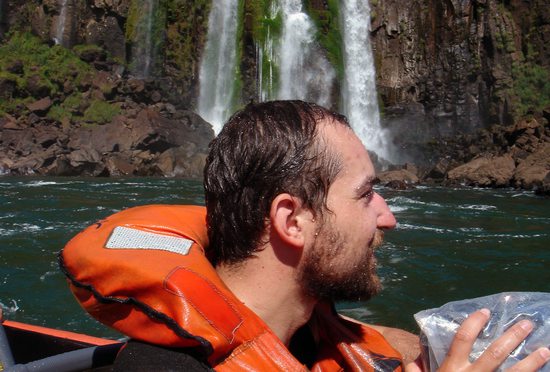 Around noon we hopped on a local bus and went to the Brazilian Foz do Iguaçu and the Paraguayan Ciudad del Este. For only 2 pesos the bus took us up to the bridge Ponte da Amizade, by means of which we got on foot from Brazil to Paraguay crossing the river Parana. Paraguay proved to be an Asian marketplace of South America. Just about everywhere, they were offering cameras, MP3, and other gadgets...The goods seemed genuine, but the prices were suspiciously low. Vlada let himself carried away and bought an iPod with 2 GB memory for less than $ 50! 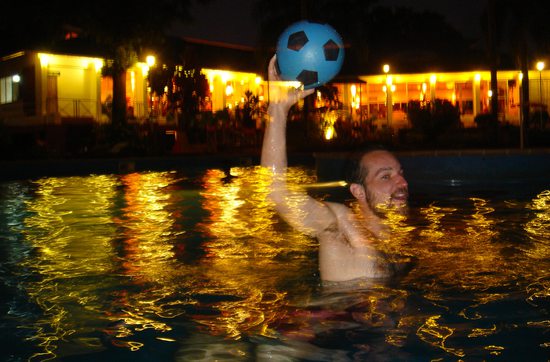 Then we came across a fine restaurant - and once again, the prices pleased ourselves. We finished the day on a sightseeing bus around the Brazilian Foz do Iguaçu. We didn’t feel like hanging around in town and wanted to go back to Argentina. I wanted a stamp in my passport and inadvertently made our way back a bit longer, because the bus dropped us at the Brazilian border and ran away. We were said to wait an hour for another bus! We didn’t want to wait in the middle of nowhere and set off on foot to Argentina, crossing the second bridge called Ponte President Tancredo Neves stretching across the river Iguazu.

Traveller's Guru is the name of a magazine, available for free, advising the helpless tourists on what to see, where to go, what to taste and so on. On Thursday morning we had a few hours of leisure and no idea what to do with them. We found in the magazine that just a short walk from the hostel there’s a house made from used plastic PET bottles. Guru was claiming that we were going to be impressed and learn a thing about ecology. Why not! 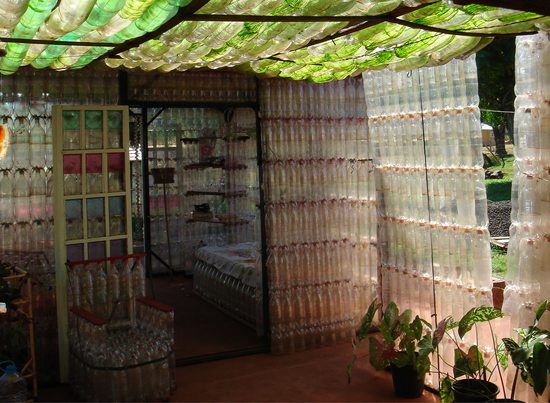 After paying the admission fee a young guide started a professionally learned lecture in Spanish. He showed us the old toilet bowls – turned into flower pots now, an old typewriter – now something like a pot as well. Quite an impressive start! He then explained the system of linking PET bottles together and a truly ingenious solar water heater - made of PET bottles. We sat in a PET chair and found out that instead of house, we are in a kind of veranda, which serves as a commercial stand selling various toys and other junk made of plastic bottles, Coke cans and old wires!

We thanked for an interesting lecture and laughing how we’ve been taken in duped by a total rubbish, we returned to the pool. The best way to kill time is after all beer and nibbles…