When leaving Aconcagua, we had only one thing in mind - steaks. Preferably asado al horno, which means a fair pound of beef. There’s Hertz car rental right next to our favorite restaurant Quinta Norte by the Independencia Park. They were so nice to upgrade us to a better car for the price of the cheapest category! Pick-up on 30th January and return on 2 February (570 pesos).

Our next steps led to Aerolineas Argentinas - Austral. Aleš was looking for a flight from San Rafael or Mendoza to Buenos Aires, from where he was meant to fly back to Prague on the 2 February. Vlada and I were looking for a flight from Puerto Iguazu to Buenos Aires for 7 or 8 of February. Aleš´s ticket from Mendoza cost 408 pesos, ours came at 386 pesos. Buying air tickets in Argentina is no doddle! There are many different fares, some exclusively for the locals, others for foreigners and it can matter what company you flew in or are flying out.

Early in the morning we checked out of Savigliano hostal where we stayed after returning from Aconcagua (26 pesos per night). We hit the road in our Chevrolet Corsa 1.6, heading south along the famous highway No. 40 (Ruta 40), which continues from Mendoza down to Patagonia for more than 3000 km! Our destination was much closer though, some 600–700 km: Provincial Park Payunia with its 450 thousand hectares of areas with the biggest concentration of volcanoes in the world (more than 800). Along the way we wanted to have a quick stop at the Llancencelo lagoon - interesting rather for ornithologists - and drive through the colourful canyon of the Atuel river (Valle Grande). Both rather in a snapshot fashion of “been there, done that”, the main thing was to see the volcanoes. 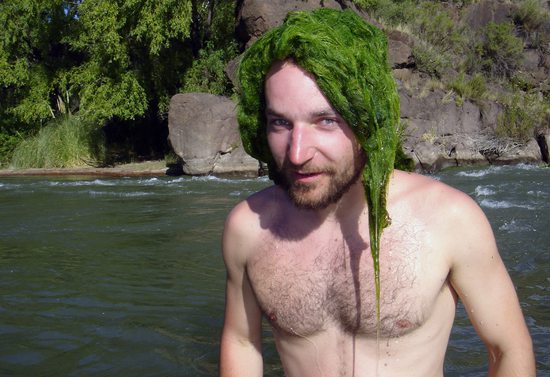 A part from loosing our way for a short moment (some 30 km) on departure from Mendoza, everything was fine. Beautiful Andes to our left, flat pampa to the right. We planned to make a first stop only in San Rafael. We called at the tourist information center and again vainly tried to send off postcards. Siesta, again and again.

We passed by all those good-looking and tempting wine cellars offers. We’ll stop on the way back tomorrow. We headed straight to the canyon Atuel. Passing by hordes of rafts men and canoeists we drove right to the first of four dams (hydro power plants Nihuel 1– 4). Finally a bit of splash after many hours of driving. The rest of the afternoon we drove along a rocky road full of amazing scenery and colourful rocks. Still upstream the Atuel river. There was a terrible rainstorm in one moment, wipers barely coped, but we just pressed ahead. In the evening we finally got to Malargue. On the Lonely Planet recommendation we went to the restaurant La Pasta to taste the local specialties, which, as we found eventually, they didn’t serve. So we ended up having yet another classic beef-pounder - Bife Chirizo. After that we added a couple of kilometres to get out of town and then crawled into our bivouac sacks right next to our car. 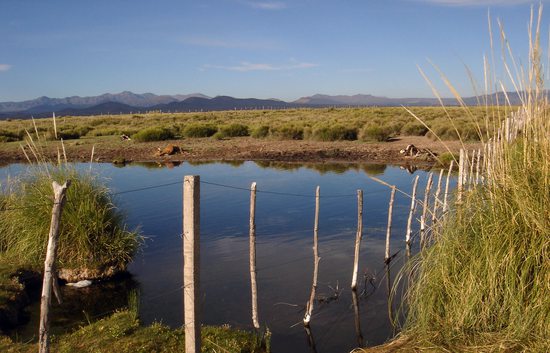 In the morning we must have badly rubbed our eyes and took a bad direction. The road was so terrible that our Chevrolet couldn’t continue any longer. We forded two smaller rivers, skipped a lot of potholes, but these stones were just too big. Backtrack. Well, it’s just a small Chevrolet, not a TATRA truck. Back at the crossroads we found that this wasn’t the right way to the volcanoes anyway. Still, there was a glimmer of hope that we would see them. We rolled over a truly extreme road and managed to get to the ranger station at the Llancencelo lagoon. A helpful guy explained that that we can make it with our car. But we could not due to our mileage. By now we have driven more than half of the free 1200 km included in the rental price. Volcanoes given up. 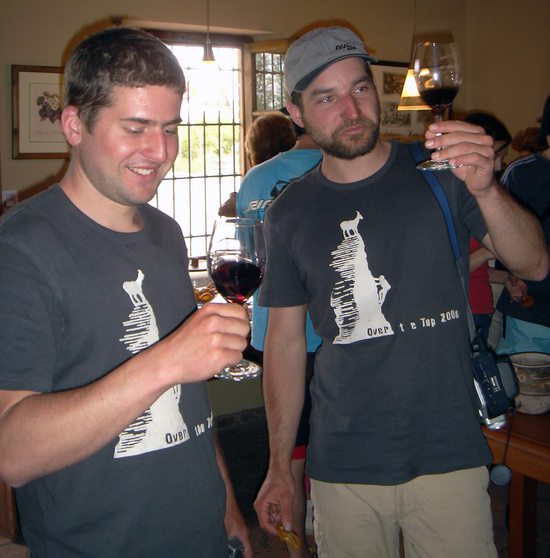 Up to hundred different bird species can be seen around the Llancencelo lagoon, including flamingos. Well, from very far away, but we did see something. And many ostriches, who fled with their young when they spotted us. After a while, everything live around us disappeared, so we could enjoy the inanimate nature all around. Snowy Andes in the background, the volcanoes on the other side. For better views, we hiked up the nearest volcano Cerro Trapal (1519m). Bird watching is not much for us. Leaving aside the beautiful springs, we weren’t crazy about the Llancacelo lagoon. On the way back we stopped at a wine cellar - Bodega Labiano. After a short lecture and walk around the "factory" we joined the mass tasting - Merlot, Malbec, Syrah ... Good inspiration for another copious dinner in the centre of San Rafael. And then spending the night under a bridge. There was no other way to exit the road – fences everywhere around. But we had a good sleep.

The car was clanking, the rear right tire losing air and there was dust and fine sand just about everywhere. We drove Aleš to the airport in Mendoza. We were a bit envious about the comfort he was enjoying because leaving for home. We handed in our polished "coche" at Hertz office, suffered the extra milage fee (in total, the car cost us 635 pesos) and right after that we sat down to have our last asado al horno in Mendoza.