Spidermen and other madmen

Back in Mendoza we checked our weight again in a nearby pharmacy. It turned out that we have lost the most during the acclimatization that toughened up our bodies in such a way that the losses at Aconcagua were almost negligible.

As obvious from the picture, Spidermen did it as well! They reached the summit gradually in the following order: yellow, red and black. But during the climb we met other madmen too.

We met Vincent from Canada first in the camp 1 while on the way up (4 850m). In the second camp (5 850m) he tried to attack the summit in a nasty weather and was forced to go back after about some 200 altitude metres. He exchanged a few words with Vlada and then collapsed and fainted. Then he went back to camp 1. For the second time we met at the Independencia Hut (6 400m). Yes, he was the crazy man to go up around 16 p.m., when we were already on our way down. 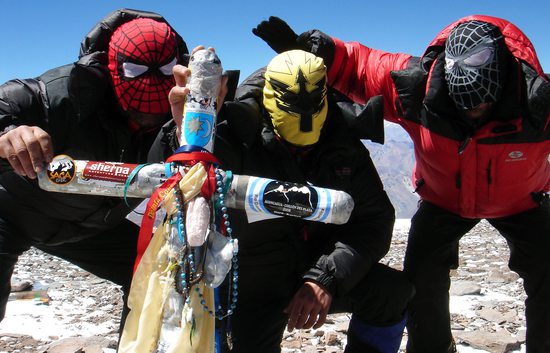 The last time we met was in a coach in Puente del Inca - he described to us his whole Aconcagua anabasis. In addition to the nine-day acclimatization in the Cordón del Plata region he spent 20 days on Aconcagua! He went three times up and back between the base camp (4 200m) and camp 2 (5 850m)! Finally he made it to the summit right from the camp 1 (4 850 m), meaning an altitude change of more than 2 000 metres. The very same day, he managed to descend to the other side of the mountain to Plaza de Mulas (4 300m), where he stayed at the hotel. He marched in the shell boots all the time, like we did. When he unveiled his toes, we even didn’t dare to speak about our minor blisters! And he was supposed to fly home the very next morning at 6:00 - quite a busy schedule!

Another interesting man was a mighty American around fifty. His specialty were carry-ups of material. We first met in the camp 1 (4 850 m). At that time he had already two bags taken up to the camp 2 and was up to take a look at White Rocks too. In the camp 2 he spent a day more (five days) than we did to make a final carry-up to White Rocks (6 050m). When we were running short of food, he offered to us genuine chicken and other delicacies. If we were going to spend another day on the climb, we would have certainly accepted such an offer. He had also valuable information about the weather. We saw him for the last time on our way down from the summit, he had yet about half an hour to go - congratulations and thank you.