The plane of Aerolineas Argentinas (Austral) took off and we had a bad luck. We were on the other side of the aircraft and couldn’t see Cataratas del Iguazú from birds eye. We were thinking that we would have paid for this extraordinary experience even those $ 70 p/p requested for a fly-over above the Falls in a helicopter. Sadly enough, this attraction was only available from Brazilian side, which we left out. What we wanted most, however, was to be back home. 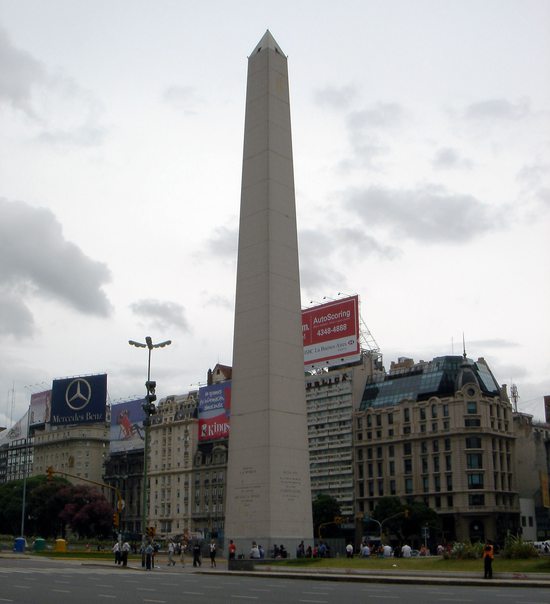 Aeroparque Jorge Newbery, for domestic flights, has one advantage to the big international airport. It is practically just outside the centre on the river banks of La Plata. We took a taxi that got us for a fixed price of 35 pesos directly to a youth hostal in Humberto Primo street. After minor issues during the allocation of rooms – first I was assigned a girl's room, against what there was an immediate upheaval of several girls wearing very thick rimmed glasses, – we set off to explore the streets. It was the last night in Argentina, in Buenos Aires, and so the last opportunity to see firsthand the tango dancers. Just needed to get tickets quickly for a tango-show, night was falling!

Going down the gigantic Avenida 9 de Julio (independence day), with 6 lanes in each direction, after a few minutes we reached the obelisk – the symbol of Buenos Aires at Plaza de la República. The obelisk is strongly reminiscent of its bigger brother in Washington and was erected in 1936 to commemorate the 400th anniversary of the first Spanish settlement on the banks of the La Plata river. 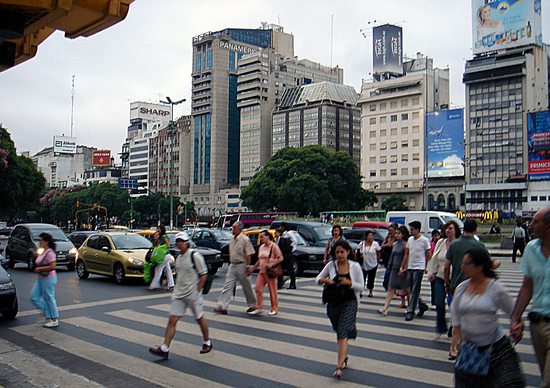 We spent a while wandering the streets of the so called Microcentre until we came across of a small passage at the Corrientes avenue with a rather hidden ticket shop. Admission for two people to tango-show, dinner included, for mere 130 pesos! The guy in the hostal was offering 160 pesos for one! We had two hours of leisure before the start of the performance. Slightly hungry we were strolling in the streets of this 13 million megacity (inner Buenos Aires has over 3 million people, 13 million with the wider area). At the pedestrian zone in the popular Florida street we bought a delicious ice cream. It is said that the quality of ice cream is thanks to the large Italian community. We can only say that we’ve never tasted such an ice cream elsewhere in the world.

Half hour before the start of the performance we got closer to the San Telmo quarter, where our hostal was. San Telmo is one of the most historic neighbourhoods. There are lots of beautiful small buildings in the colonial style, narrow cobbled-stone streets, so different from the huge, bustling, inhuman megalopolis just a few steps away. San Telmo is also know for its brave and successful resistance against the British troops that were at war with Spain in 1806. Porteños, as the Buenos Aires folks are called, were able to fight the attacking troops back to their ships.

We must have looked a bit eccentric, but we haven’t had the fun spoiled. After a three-course dinner the lights went off suddenly and only a harmonica player appeared in spotlight. He pulled out a great solo and then the show itself began. Dancers (two pairs) alternated with singers. Four-member band of perfectly concerted veterans – violin, bass, piano and accordion – played just great. We thought tango to be a dance full of abrupt and jerky movements, but it was just wild, wild, wild. The dancers seemed trying all the time to give each other a kick, women directing their kicks right between their partners´ legs… It was amazing, the tempo, harmony, perfect drill and not a single accident or a false move. The house was full of middle-aged ladies, fainting at the sight of the fantastic singer and dancers. 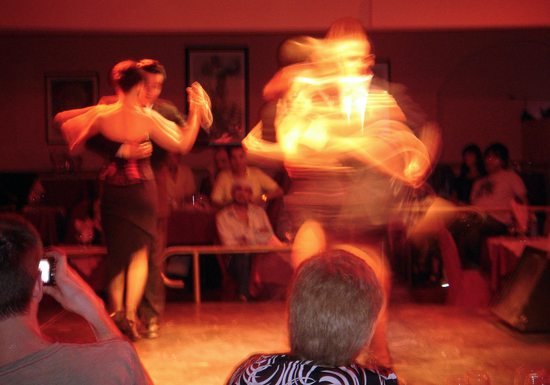 For the cheap admission we expected the show to be over in 20 minutes after dinner. Not in Argentina. Just as there are huge portions of meat, so magnificent was the show. After two hours of music, dance and singing a master of ceremony appeared and everyone was asked to say where he comes from. And then the show went on. Vlada had enough and decided to go for a midnight stroll but I enjoyed the great show until the very end. I got scared and left only at the moment when the dancers started to invite the audience to dance on the stage. I didn’t feel like taking a tango lesson. I just thought that the dancer wouldn’t be delighted by my mountain boots and a t-shirt unwashed for a whole week.

Friday was the last day. Our plane was supposed to take off only an hour before midnight, so after a late breakfast we went for a walk once again, first heading to Puerto Madero district. Unlike the historic San Telmo, Puerto Madero is the most recent of all 48 districts of Buenos Aires. It is a modern place with concrete buildings and four water reservoirs, since a new port was supposed to be built there some 100 years ago. The idea did not work and the build stopped after a few years, leaving the entire area laying dormant until 1989. There’s a modern Opera House inspired by that in Sydney and a beautiful new Puente de la Mujer designed by Santiago Calatrava. The bridge can rotate 90 degrees, allowing ships to pass. We also visited the 85m long Fragata Presidente Sarmiento, which was launched in 1887 and served in the Argentine naval forces as training ship until 1938. Over this period it made it 37times around the world. The ship was decommissioned in 1961 and shortly afterward declared a national monument.

Our walk finished at about 5 p.m. in front of Palacio del Congreso. The building was completed in 1906 and once again inspired by its elder brother – Capitol in Washington, DC.

At Plaza del Congreso we spotted a bus No. 86 going to the airport, which led us to the idea of trying public transport instead of taking a shuttle bus or taxi. By metro – which looks like a vintage tram in this part of line „A“, wooden interior and doors operated manually – we got back to our hostal. The nearest stop of No. 86 was just two blocks away. 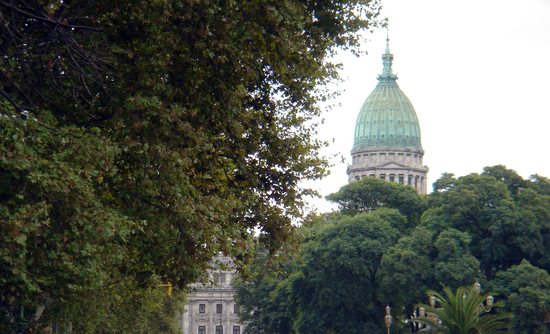 The scenic ride by No. 86 cost only 1 peso 50 centavos and lasted 2 hours and 15 minutes! We arrived at the 35-km distant Ministro Pistarini international airport just two hours before departure. We repacked our bags, let them wrapped in plastic film and that was it. Our last expense was 18 USD for departure taxes..

Waiting for the take-off we made a brief summary: everyone in good health, nobody robbed and everything worked according to plan – the expedition „Over the Top 2008“ was a great trip.