"Hi. You take your helmet?"
"Yeah. It´s a must!"
"Okay. I have to finish my packing very quickly. Trying to catch up. See you."

"How many friends are you taking? I don´t want to take too much iron with me, which will not be used then."
"I take only three. Type one, two and three. So you take a smaller one and one more one-type. Otherwise, take the hex set yet, I chose a couple of stoppers and runners. Don´t take quickdraws, I have them packed."
"Okay. I take zero seventy five and one. I will also add three or four runners, some free carabines and two sixty-metre rope twins."
"OK. That will be enough. Even so, it will be heavy like shit."
"Hope they will let us board the plane with no additional charge."
"We're four, we´ll pool it somehow."
"Okay. I'm going to finish packing."

Half an hour later.

"You take a carpet tape? And how about a socket adaptor?"
"I take a tape. Shit, I would have forgotten the adapter, I put a British version in."
"So see you at two at the airport."
"Yeah. I'll be there."

The last hours are always hectic. Few of us can prepare everything in advance and produce a perfectely packed and weighted backpack two or three hours before departure and just take the passport and money and slowly go to the airport. Our way is that we are in a constant touch from early morning, troubleshooting, deciding who takes what and guessing who will have the heaviest backpack to carry. Actually, everybody knows that from the very beginning. I am always the one to have the largest and heaviest packs. I've never disappointed. Well, only I take all the cameras and object-lenses and some spare stuff. And gradually it adds up to at least a five-kilos lead to the runner-up.

But this year´s departure for the Africa event was not only hectic. There were emotions too! And what a hell of emotions!

Three and a half hours before departure, after endless phone calls and haggling Milan finally appeared at my door. Big guy with a big backpack, but apparently very much a goosey boy.

"I'm not going. I don´t have the guts."
"Nonsens! Let´s go to the airport to meet with the other boys. There wi´ll sit down and have a chat. You just calm down and will enjoy it greatly in the end. No need to worry. Everything is a first time."
"I give up. I will not even go to the airport."

Beyond that point our twenty-minute "conversation" turned ugly and should rather not be published. I think that our neigbours just heard a lot of pithy words, sort of dessert after a good Saturday lunch. Public show ended by slammed doors and leaving for the airport - without Milan. He just didn´t have the tiny bit of courage to go with me to the Ruzyne Airport and say to colleagues that he is scratching an event that we were preparing for over six monts - and that he is giving us just three hours to deal with it.

Inglorious was the end of the first phase of our African trip.

I let rather Hanka drive the car since I was still red-hot. Three hours to departure. I'm happy we arrived an hour earlier so we have some time to regroup, repackage and discuss a new “strategy". We know that will not fix everything. Since one pair was meant as "climbing" and the other one as "pedestrian", there is no other way than that Pavel will have to be at least a day or two on his own and he will thus try alone one of the Mt. Kenya summits. It´s an unpleasant situation. Whatever can happen in the distant mountains and a lonely man can hardly help himself in trouble. His help to any of his two climbing mates would be rather problematic too. We'll see.

Pavel´s car stops next to ours. Lada is already waiting in the hall. We discuss the situation and re-distribute the load of our backpacks. We have to make a clean up, it´s still a way too much for three men. 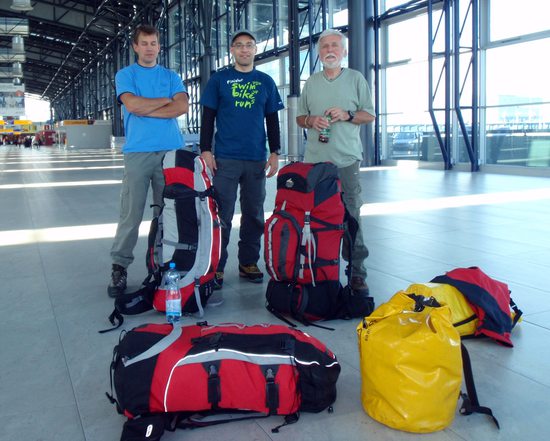 After half an hour of hectic activity we are done. On the ground there´s a heap of discarded things, no wonder the police start to nervously circle around us. Finally, it´s at least possible to lift our bags, although with a lot of effort, and to put them on the trolley. The heaviest bag has close to 30 kgs. The situation is calming down and we begin to focus on the following day.

Our tent didn´t fit inside so we have to carry it as one of the many pieces of cabin baggage.

"Gentlemen, can you please unpack this baggage?"
"Sure, it´s just a tent. The poles are in the checked luggage, so there shouldn´t be any problem."
"Ok, and what´s this?"

Security guy expertly pulls out a small bag with metal and of course strongly sharpened pickets! In that mess we forgot to put them down to cargo. I didn´t want to lose them altogether, so I called Hanka to return and take them back home. We´ll have to do without them.

The flight to Amsterdam was marked by not particularly encouraging mini cakes filled with a kind of disgusting red gel and served by smiling cabin crew.

At Amsterdam's Schiphol Airport we finally sit down and chat around the long-awaited beer, eventually getting into the right expedition mood after all that fuck-up before departure. We´ll shortly be boarding a Boeing 777 of Kenya Airways and start the next and hopefully best stage - the expedition itself …