It goes better when chewing coca 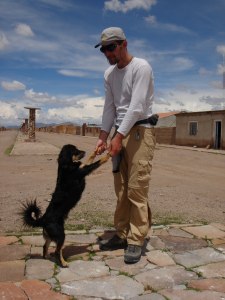 A small bush hosting an abundance of 3cm leaves and yielding 3-4 times a year occupies a very important place in life of the locals. You can buy coca on the market in huge sacks or ask for a coca tea in a restaurant. Yes, it is the coca out of which cocaine is made. Before, it was also an ingredient of the fancied Coca-Cola drink.

In Incan mythology we can find many goddess, the most important among all is Pachamama or Mama Pacha - mother of earth. Another very interesting one is Kuka Mama or Mama Kuka (in quechua: Mother coca), who was a goddess of health, joy and love. She was originally a promiscuous woman who was cut in half by her many lovers. Her body grew into the first coca plant, the leaves of which men were only allowed to chew (to bring health and happiness) after having given a woman an orgasm.

Coca helps gringos to overcome problems with local high altitudes since one of its effects is a better ability of blood to transfer oxygen. In the pre-Colombian era it was only rulers prerogative. However, after the Spaniards had found out the indigenous were capable of working longer and without stops for food (it holds back the feeling of hunger), the coca began to be served to workers in mines. In order to obtain the effect one can either chew the leaves or have a tea Mate de Coca. 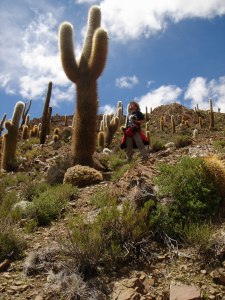 In the Coca Museum there was a description of an experiment during which monkeys could take a dose of coca all by themselves just by pressing a special button (pleasure button). After they had learnt how the machine worked, they were capable of pressing the button up to 4000 times in one hour! In the end they died because they just forgot about the basic needs of food and water.

We tasted coca for the first time in the form of a tea before the ascent of Licancabur. We didnt notice practically any effect. Vladimir was chewing during the climb because he wanted to believe it and didnt care about the aftertaste. Martin did not, since it was making him feel sick. But during the last climb of Huayana Potosi it did help to relieve the pain in the belly.

The overwhelming majority of the locals, especially the indigenous, enjoy the coca in a way people back home enjoy coffee.