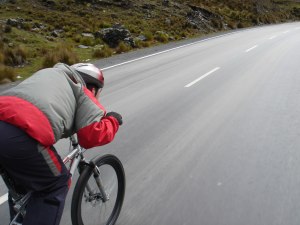 We wanted to experience some descent after all the climbing. There is no better place than La Paz. We couldnt miss the opportunity to make the descent from La Cumbre (4700m) to the jungle in an altitude of 1300m, especially when using the worlds most dangerous road for the downhill ride. Why the most dangerous? Annually, there are in average 26 vehicles that fall over the brink which is the highest number according to a study by the Inter-American Development Bank. The road is only 3,2m wide but you can easily meet a coach or a truck going in the opposite direction. 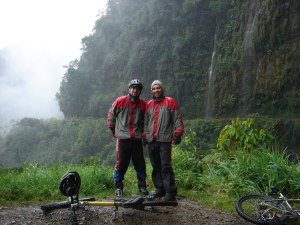 We chose one out of the myriads of agencies and were driven up to the summit of La Cumbre. The mountain bikes were of good quality with suspension forks, disc brakes (there would hardly be other solution given the dampness all around) and very thick tyres. We were four (a Dutch and an American) + guide.

The guide is going in the front and gives signals whether to slow down or go faster. You are followed by a supporting car with your stuff and food. 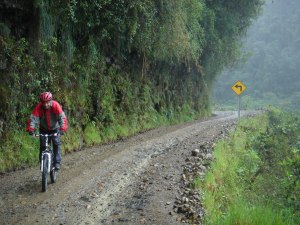 The weather was favourable, it wasnt raining. First 1500m are made on tarmac. In this part we enjoyed a decent speed including overtaking several coaches. It turned out that Martins weight makes him the fastest racer.

After this, rather calm, part there was a short climb. The true adrenalin came just after that. We got onto a gravel road that followed the edge of the mountain. The rock to the right and a 500-metres-deep gap to the left. The temperature was going up as we descended and we were passing through several misty and rainy sections. We had a very good guide with no fears and we soon overtook several other groups. 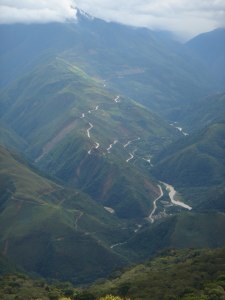 Martins glasses had no chance they were hazy all the time and he had to take them off. But it was no cure. I got a glance of a cyclist ahead of me taking a header over the handlebars. It was in a turn and on the gravel. I caught up and saw Martin emerging from the bush smiling and saying to be all right. Luckily, there wasnt a steep slope there. He was really O.K. so we continued. When there was a bit of time we watched the vegetation changing. Suddenly, there was no barren altiplano around but a lush jungle hot and wet.

The remaining 1000m-leg was done on a dry road only with few half-calf-deep creeks. Finally, we arrived at a small village called Yolosa and were driven to the town of Coroico. There we took a shower and had abundant lunch in a luxurious hotel Esmeralda. A swimming pool, nice temperature and beautiful views made us feel refreshed again and at about 4 p.m. we were on our way back to La Paz. 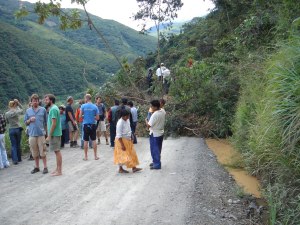 You may be wondering that it wouldnt be us if something treacherous didnt happen. And of course it did. After about 20 minutes of the backwards journey we reached a queue of waiting cars. Rainy season is rainy season. There was a 10 metres long mass of fallen rock blocking the road. A new road is under construction longer but safer. It should be finished in a six-month time. It is practicable already so we wanted to make use of it and backtracked a bit. After few minutes of downhill ride we arrived at another convoy, there was just another derrumbe (landslide). We were trapped. 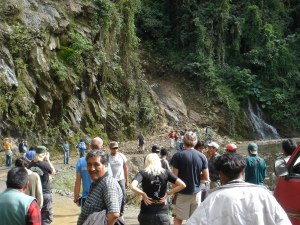 We could do nothing but wait. A bulldozer arrived within two hours and started to clear the mass away. It took about an hour to do it. We continued down to the village. There was a cave-in on the new road as well so we waited until the old road was free of any obstacles. At about 8 p.m. we were heading up again. It was almost no surprise to us that the bulldozer was still working. There was a new layer of rock so the landslide was some 3 metres high and 10 metres long. The road was clear at about 21:30hrs. We went straight to bed in La Paz, there was the ascent of Huayana Potosi (6088m) waiting for us the following morning.