After we had come back from the bikes we had a short sleep accompanied by the sounds of a local disco and around 8 oclock in the morning we were already waiting in front of the Alfonso Andino agency. The agency provided us with equipment we were missing. Tent and ice axes (we left ours in Santiago). They also arranged for transport, guide and food. We selected the fast, two-day option. 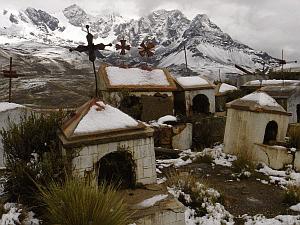 On the way from La Paz, passing through its highest quarter of El Alto where we bought food for the climb, we made only one stop in Milluni. Here, there is a miners graveyard and a superb view of Huayana Potosi. After an hour drive we stopped at Refugio in an altitude of 4600m. We had quick lunch and, following the example of our guide, we put on the shell boots.

The hike to the altitude camp took us less than 3 hours. In the final stage we acknowledged the duplex boots, otherwise not very comfortable on the stony path. We started to walk in snow. The altitude camp (Campo Alto) is in an altitude of less than 5200m. After the meals there were only 4 hours of sleep for us and the wake-up call at 23:30hrs! 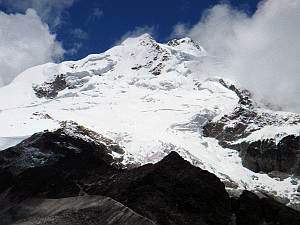 In the night there was o mighty snowstorm attacking our tent. Vladimir didnt manage to fall asleep and he felt a stomach sickness caused most probably by saltenas that we had in El Alto. Before the sleep both of us had to relieve our guts several times. Martin was helped by a powerful dose of animal charcoal and loads of other pills against the trots. Vladimir found only a temporary solution in a strong Mate de Coca at midnight.

Before midnight, our guide Mario took a quick peep into our tent that was being lashed by the gusts of wind. With a serious face he asked whether we wanted to carry on. Of course we did. Fortunately, the wind calmed down and only a 30cm layer of fresh snow remained. We had a snack, put on anoraks, harnesses, crampons and attached ourselves by rope.

There was a six-member Slovenian group in the camp getting ready for the climb. We left first. Mario (with his 150 cm and 50 kg) going first, followed by considerably heavier Vladimir (80 kg) and finally Martin with his 100 kilos. We were quick to realize that the ascent wasnt going to be a piece of cake. Where Mario sank up to his ankles, Vladimir made it up to his knees and Martin half up the thighs. In this manner we gained some 300 altitude metres. We could see the headlights of the Slovenians who were some 10 minutes behind. We said to ourselves that we could be switching in the arduous job of beating up the path in the snow and waited for them to catch up and go first. We were slightly surprised to find ourselves again in the lead just after five minutes. We stopped and they stopped as well. The deal was not possible, they were simply not willing to exchange in sharing the burden. Previously English speaking people were suddenly deaf and silent. No wonder, after we had briefly experienced walking in the beaten track, we wouldnt have changed either. 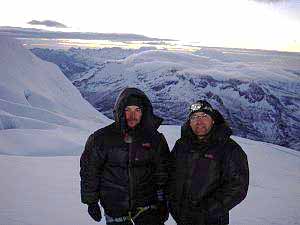 Making our way through in the snow was too time-consuming and extremely exhausting. In the rainy period it is necessary to finish the ascent by sunrise and then go back very quickly. Otherwise you run the risk of avalanches and the snow is even softer. We didnt have a good intermediate time but still we pressed forward up to some 5800m where the dawn caught us up. The others returned already a long ago. Vladimir kept having stomach pains and chewing coca was not of help any longer. Martin was feeling perfect, he went to see the ice falls with Mario and took some pictures there but it was no good it was just too late. 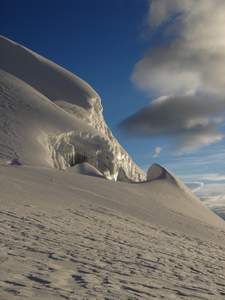 Almost during the whole trip there was no wind, temperature something around 10 degrees and bright moon. Above 5500m we enjoyed the view of shining La Paz that emerged from between the summits of surrounding mountains. Visibility in the morning was just flawless and the sun prepared to us a magnificent spectacle. This ascent was, regardless of another failure, the most beautiful experience from the South American mountains. If only we had been there off the rainy season!

The descent was pretty unpleasant for the two of us. To be exact it was very much worse than the climb itself. The stomach pains caused by the spoilt food we had the previous day knocked us out completely. After a short brake at the altitude camp we continued further down. This time the snow remained until Refugio in 4600 metres!

Unfortunately this was our last mountain. Theres no time left if we want to see the Lake Titicaca. That means that our bold resolution to make at least one of the 6000m will not be met. Just one small step was missing ...