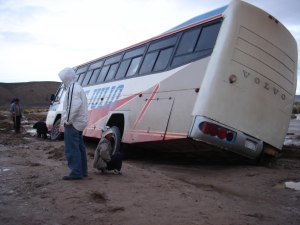 The original plan was to travel those 300 km from Uyuni to Oruro by train but unfortunately the tickets were sold out already the day before. So we had to content ourselves with coach once again. At 8 p.m. we got on a bit shabby bus of the 16 de Julio Company. The journey should have lasted ten hours.

In about two hours we were already reaching a breathtaking speed of 20km/h on a muddy road decorated by deep puddles. The coach stopped all of sudden and we got stuck there for good ten hours till the morning without anybody bothering to come and explain to us what had happened. During the night we found out that the road was impracticable, it was taken away by the water. 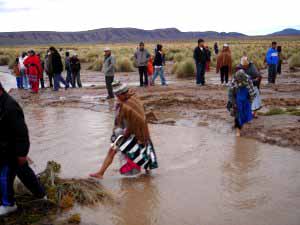 Three meters from the main arm of the creek there was a coach deeply sunken into the mud and dangerously inclined. It was full of sleeping passengers which apparently didnt make any fuss about the situation.

Everything was set in motion in the morning. During the night decent rows of waiting coaches and trucks lined up on both sides of the creek. People began to gather some grass and bush in order to strengthen the road (in Bolivia the army and the State dont help anybody). 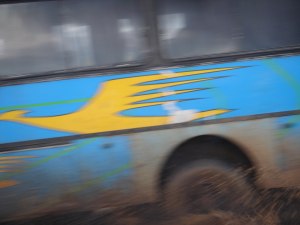 The road thus improved enabled two coaches to pass through. But the third got stuck definitely and joined the inclined one. The road seemed to be blocked forever.

Manoeuvres began. There was a coach belonging to the same company on the other side and we rushed to it to ask whether the driver was willing to go back and get us to Oruro. He refused. Following the examples of other stranded passengers we were running around asking other drivers to take us on board. Finally, one driver of 11 de Julio Company nodded to take some standing passengers on board. 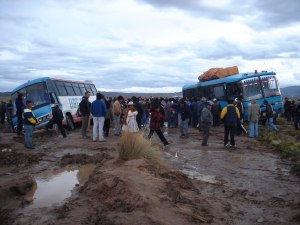 Another eight incredible hours were ahead of us fording streams and rivers and getting stuck in mud. Eventually, some two hours before Oruro we caught sight of tarmac for the first time in Bolivia.

Before this trip we did not follow the good advice by Lonely Planet to take enough of food and water. Two litres of water and a handful of biscuits were simply too little for 25 hours. During a stop in one of the villages there were local women selling food. But we found ourselves only at the end of the queue and only a piece of cheese and ultra hard nuts remained left for us, water had just been sold out.

After the evening arrival to Oruro and knackered after the journey we put ourselves up at a hostel just next to the station and agreed to carry on to La Paz early in the morning. 20 km off Oruro the coach stopped again. There was a convoy of about 50 vehicles. We began to fear the worse but the road was cleared in 20 minutes. It was about noon when we landed in La Paz.