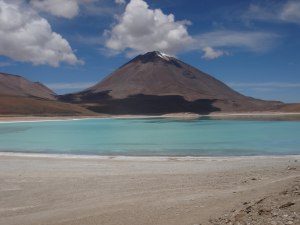 On Monday morning (6 February) together with other 14 people we boarded a coach and crossed once again the Chilean-Bolivian border in order to enjoy three days in the nature of the Bolivian altiplano. We've bought this, already third, PACKAGE at Colque agency. The price for three days was all-inclusive: food, accommodation, transport as well as rather reticent driver Satuko. A luxury for 70 US dollars.

After collective breakfast nearby Laguna Blanca we squeezed ourselves into three pretty worn-out off-road Toyotas and started the trip. A French girl Stefanie with her Salvadorian boyfriend was keeping us company in our car. 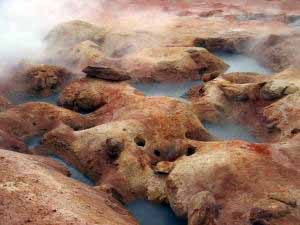 The first stop was at Laguna Verde - already well known to us. We watched it from the summit of Licancabur. It is one of the few lagoons in this region with no flamingos. This was followed up by thermal baths located by a big but shallow lake (max. 30cm). The water had very pleasant 36 degrees. Taking pictures at Rocas de Dali made for another stop. Passing then by the geysers Sol del Manana (4950m) we arrived at Laguna Colorada where we stayed overnight. The altitude in the course of the day was often around 5000m which was quite recognisable on a number of our travel mates - the girls were no exception. 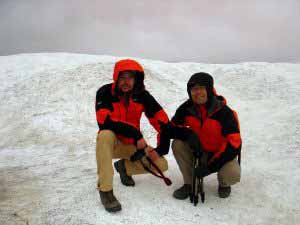 The lagoon is all red sprinkled with glittering islets of borax. We set out to visit one of them right after lunch that only we out of the whole group could duly enjoy. The weather in the rainy period wasn't nice with us and the rain drove us back just after an hour.

Before dinner we went to visit Mirador, a place some 2kms away, from where there are marvellous views of the lagoon with lots of flamingos on it. By accident we found ourselves encircled by a herd of lamas of different sizes and colours. Shepherds were driving them back so we joined in. 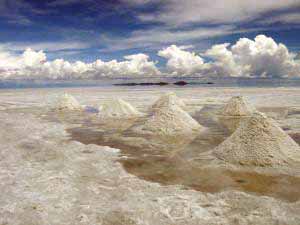 We spent the second day on transfer from the Laguna Colorada to Uyuni that is about 200kms away. To our frustration, there were only few stops during the day. Herds of vicunas, stone formations, flamingos, traditional Bolivian villages and so on. We stopped for lunch in one of the villages and visited its church with a fine belfry. The zenith came in the form of a burial place of old trains two kilometres off Uyuni.

Our preoccupations proved right when we found out that there was too much water on the salar. It is not possible to visit Isla de Pescadores in the rainy season. The island lies in the middle of the salt desert and is full of huge cactuses. Nor the Thunupa volcano (5400m), which we planned to climb up, was accessible. 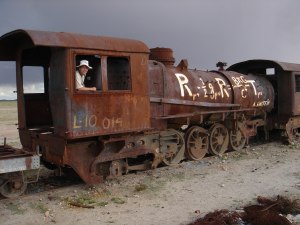 The rainy season here looks like this: it is usually sunny from the morning till noon but clouds are already gathering on the horizon. Storms with lightening, thunders, and masses of water come up in the afternoon.

The third day we headed for the Salar de Uyuni only at 10:30hrs which is rather late - thy sky was almost covered by clouds by then. Although we were only 2 kilometres from the edge of the salar, it was an extraordinary experience. The horizon disappeared; one could see other people walking in the midst of the sky. The clouds were mirrored in a calm 1-5cm-deep layer of water that was covering everything around. 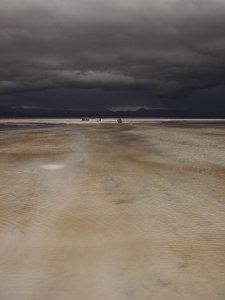 The COLQUE travel agency, which we chose in San Pedro, didn't meet our expectations and didn't stand to its promises.

Some of our reservations:

We were caught by storm on our way from the salar. The driver just didn't care about our complaints that there was water falling from the ceiling. When going there we noticed that the wipers didn't work. Salt water rushing over the windscreen made the outlook to the front impossible. The driver helped himself by looking out through the side window. But we lost our humour in the storm. 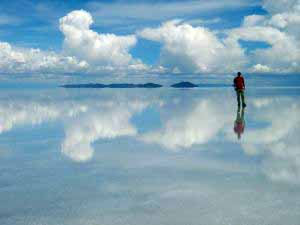 Water was running from the roof, visibility close to zero. The car was running without a key in the ignition by the way. Finally, the engine packed up about 20 kilometres from Uyuni. This unwanted stop was caused by the sparking plugs that got wet as the driver explained to us. We spent half-an-hour catching the water into plastic caps. After that the engine started up and we made it to the final destination.

At 8 p.m. we jumped on a coach again and left for Oruro which is about 300kms from here.