La Paz and the trip to Tiwanaku 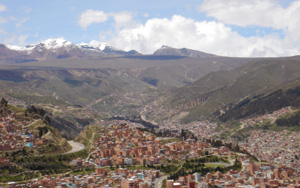 The highest city in the world, which has approximately 1 million inhabitants, serves as the administrative centre of Bolivia. But it is not the official capital - that title holds the city of Sucre. The city centre is in 3600m but the liveliest and most populated quarter called El Alto lies above 4100m (including its unique international airport).

These days El Alto makes almost for an independent city encircling central La Paz down in the valley. Its population is made up mainly by the indigenous peoples of Aymara and Quechua that still prefer their original languages to Spanish. Due to the never-ending trend of moving into big cities, El Alto is the fastest growing city in Bolivia. 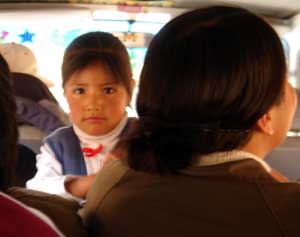 When the sky is clear La Paz offers really breathtaking views. Not only views of the city itself but those of its mountain range - Cordillera Real in the backdrop. The Cordillera Real is dominated by the ever snow-capped and three-peak mountain of Illimani, the 6500m high symbol of La Paz. The city is not ablaze with colours and when looking from the heights it is the brownish hue of the plaster-free facades that prevails.

The city is jammed by taxies, collectivos and old buses (Dodge, Ford) that produce unsupportable thick clouds of smoke when roaring up the city slopes. Experiencing a bus passing along you on a steep street is nothing you would enjoy. Surprisingly, and in spite of no respect for the road rules, we haven't seen any accident. It may be so thanks to the drivers that never put their hand off the horn. 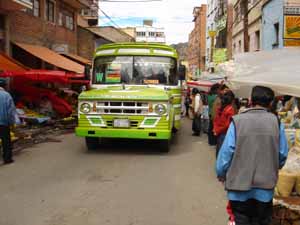 Streets are lined by sitting merchants of all conceivable stuff. The position of the street dealers of certain goods isn't random. Often, one street is devoted only to one commodity. Bread, fruits, many kinds of potatoes, souvenirs and the traditional womens hats are among the most fancied stuff.

When shopping in the street you realize the power of one Bolivian (1 $US = 8 Bolivians). It's fine to be in a country which is four times cheaper than Chile. And what can be had for 1 Bolivian? 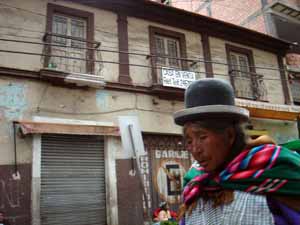 Demonstrations take place quite often on the different squares of La Paz. The participants are faced with heavily equipped anti-riot troops and government jeeps with conspicuously black windows are never far away. During the daytime most of the crowd is made up by grandmas in hats and wide skirts while the night time demonstrations are the proletariats game. During one of the latter we had a chance to learn that: "propiedad privada tiene que morir". 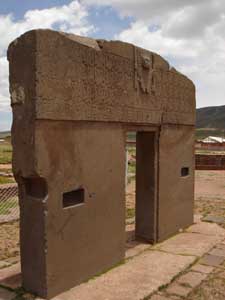 An hour and half from La Paz by overcrowded colectivo there is an archaeological site of the oldest South American culture - Tiwanaku. More than 2200 years ago, on the south shore of the Lake Titicaca (nowadays the shore is some 40km to the south), cultural centre of this civilization began to rise. The culture of Tiwanaku ruled the whole area for 500 years. Its downfall dates to 1100 A.D.

For the entrance fee of 80 Bolivians you can visit two little museums with a couple of statues, skulls, pieces of ceramics and everyday life utensils. The works are still in progress on the archaeological site. You can admire the precision working of stone both in the walls construction and the artistic shaping of stone on the Sun Portal (made from a single piece of stone) or several other statues or walls. The whole tour took us roughly three pleasant hours. 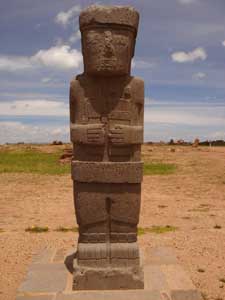 A town of the same name is situated nearby the excavation site. There is an interesting church with statues of the Tiwanaku culture in front of it. One has to note that all valuables were taken away by the Spaniards and a lot of things are in museums throughout the world.

The upcoming article will be from the Titicaca Lake where we are tracing the Inca culture ...