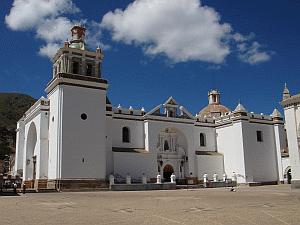 In Copacabana, the biggest Bolivian town on the shore of the Titicaca lake we met Eva and Milena again. While they were leaving the following day we were getting ready for the local main attraction - Isla del Sol. We met again Armando and Stefani by accident. After dinner together we've changed our plans. We wanted to see Cuzco and maybe Machu Picchu too.

With the wrong information that ships are leaving for Isla del Sol at 9:30, we were sadly watching the empty harbour a bit after nine. Ships left at 8:30. Armando and Stefani joined us after while; we must have misinformed them as well about the departure time. So we waited for the second wave of departures at 13:30. 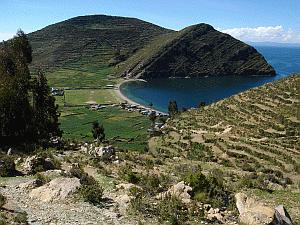 Isla del Sol is an island 10km long and 2km wide. It's supposed to be full of Inca ruins. On your way to them you can enjoy green fertile slopes with cascade fields and white sandy or pebble beaches.

After one and half hour of sail we disembarked in a little village under ancient stone stairs leading to the Inca spring (Fuente del Inca). We filled our bottles with this sacred water and headed to the north with the intention to traverse the whole island, spend a night there and then catch a boat to Copacabana the following day at 10 a.m. 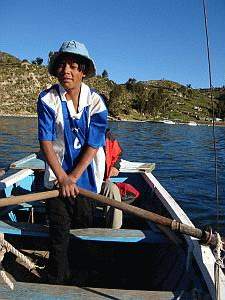 Terrain wasn't hard, the weather was beautiful and there were not many tourists either. From one terrace at 4000m we could admire a marvellous green bay. We wanted to have a bath in Titicaca so we went down and gave it a try. The water was surprisingly cold. After that we were making our way off the beaten track, through a weird maze of tiny paths between the little fields, herds of lamas and sheep. After another mountain edge we came to a village called Challa where we nodded to the offer made by a local boy to take us across the bay to the village Challapampa in the very north of the island. It was a pleasure to sit on the boat and calmly enjoy the landscape.

We had a hard time then to find a shelter. There was a kind of feast going on at the basketball field. There was a brass band of seven trumpets and some other instruments. Their performance was just incredible - one song but every member of the band playing on a different note or what. The result was even worse than a jazz concert at the Prague Castle recently. The drummer was banging the huge drum in an absolutely unpredictable manner. 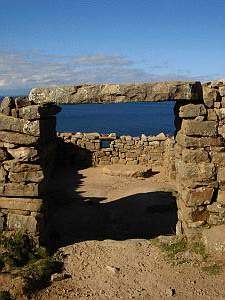 Early in the morning we continued to the ruins praised by Lonely Planet. It was good but rather small. We made it in an hour. We had no chance to catch the boat at 10:30 so we hit the southbound road at a calm pace. This time we followed the western side of the island which is almost uninhabited and can offer some spectacular views.

In the middle of the island we were startled by a road-toll being charged for the passage through the Challa community area. Finally, we reached the very southern edge of the island where there is quite a well preserved ruin of two-floor Inca building. Then we went back to the port-village and waited for the ships back to Copacabana at 16:00hrs. To kill the time off while waiting we were taking pictures of those lovely children that were fussing about. We had to give them some small money for their artistic performance. 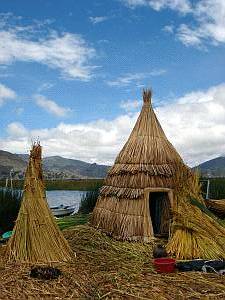 Next afternoon we continued to Puno at the Peruvian side of Titicaca where we intended to see the floating reed islands called Uros with "indigenous inhabitants".

We settled directly in the bus terminal hostel. We bought a package deal to Uros and also tickets to Cuzco for the next day. Right after this administration business we took perch in a new means of transport a motor-rickshaw - which took us to the city centre. We had a fish in a luxury restaurant splashed by pisco that is a local traditional alcoholic beverage produced only in Peru and Chile. The two countries still dispute its origin.

Contrary to the girls (which were there two days before), our trip to Uros came about without any problems and we could do without acquainting ourselves with the local tourist police.

There are about 40 reed islands altogether with a population of about 1000 inhabitants. These days, they live mainly from tourism and posing for photographers, not from fishing. So the reality is a bit different from what the leaflets of tourist agencies call an original way of life. But still, the walk on the floating islands is simply a must and well worth a visit. There must be a new layer of reed added every 20 days, since the reed decays quite fast. It happens sometimes that the island breaks apart and the pieces float away with their inhabitants on board, of course. 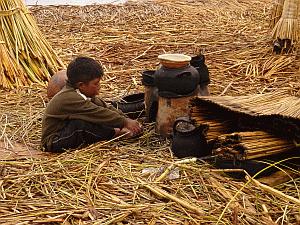 Back in the bus terminal we woke up and realised that there's no time to go to Cuzco, not to speak about Machu Picchu. We changed the tickets for the ones in the direction of Chile via the Peruvian second largest city Arequipa. As you can suspect, it was not the loudmouth touts at the bus terminal that allured us to Arequipa. It was on a good-quality colour postcard of Arequipa where we spotted the giant strato-volcanoes towering over the city. They must have had more than 6000m ...