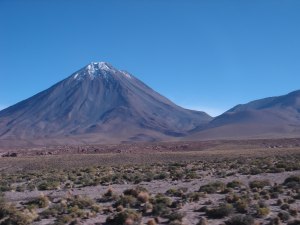 Licancabur is a border mountain between Chile and Bolivia. We considered its height of 5960m sufficient after our previous attempts in order to find out whether there is any sense for us trying to attack any of the six-thousands. There are many travel agencies in San Pedro that offer the ascent of Licancabur as a PACKAGE formula but prices were starting at 100 USD per person. That was why at the Cordillera agency we bought only transfer to the Bolivian border (Hito Cajon) and from there on it was only about our Spanish and luck.

The Bolivian customs officers at the border asked for 15 bolivianos for ink for their stamps and we were cleared for the altitude of 4400m. Three kilometres further we paid the entrance fee to the national park of Reserva Nacional de Fauna Andina Eduardo Avaroa and we took lodgings at the same place. Laguna Blanca dotted with flamingos is well within sight. We set out to watch them and take pictures, of course. We didn't want to risk, so we put a light acclimatization trip to about 5000m on the agenda of the next day. On the eve of the ascent we talked to our guide - it seemed compulsory to have one. We fixed the departure at 3 o'clock in the morning. In the evening a guy wanting to join us in the car showed up. We agreed on the condition that he would contribute to the costs of the transfer.

Getting up at 2 a.m. wasn't much of a pleasure. We waited for a bulky breakfast and after three o'clock we were approaching the foot of the volcano in an old Toyota. With headlights and at a slow pace we started the climb. To our surprise it was relatively hot and calm. We could do well only with a t-shirt, wind stopper and gore-tex jacket by Tilak, thin gloves, cap and hiking sticks. The only break we had was at dawn at about six o'clock - a fine view of the Laguna Verde was emerging.

The guide was chewing coca leaves all the time so we gave it a try as well. Sadly, we didn't feel any effect. In approximately 5400m Martin, exceptionally free of any significant physical problems, decided for shooting pictures and showed no motivation to continue uphill. 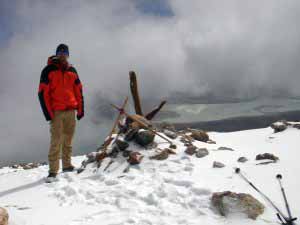 With an ever-coughing German and tireless guide we kept the same tempo up to the altitude of 5700m. There I began gasping slightly for breath but fortunately I did without any headache or pain in the belly area. The guide told us that an hour was needed to reach the summit which was not visible because of the steep climb. The snow layer got deeper as well in this height after a storm the previous day. I began to count my steps.

I felt the euphoria at the top after some sixteen thousand steps. Unfortunately, the summit was surrounded by scattered clouds so the views were not the best. After six hours of ascent there were only two hours ahead of us to make the downhill walk.

There's only a small step missing to meet our resolution. Will Bolivia become our bonanza?