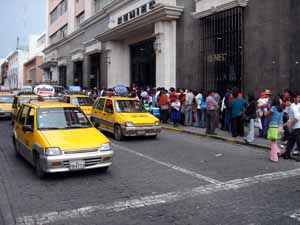 The very same day we had descended from Chachani we set out for 2500km long southbound journey to Santiago de Chile. We didnt even have time to dry our clothes off or take a breather. We had to hurry to catch the coach because we had learnt in the bus terminal that there shouldnt be any connection the following day. The south Peru declared a coach-free day.

By the night bus we got to Tacna a border town roughly one-and-half-hour drive from Chilean Arica. Two middle-aged ladies offered to arrange the accommodation for us. They mentioned by the way that it would be cheaper if we took a taxi together. The hostel turned out to be one of the worse but only five hours of sleep were at stake, since early in the morning we had to jump on the coach to Arica. So we took only two brief glances of Tacna when rushing in the taxi from and to the coach terminal. 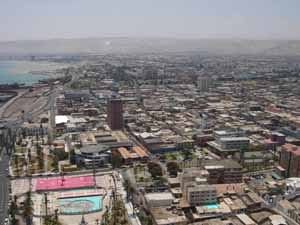 After passing through several queues and counters at the borders, where we underwent a thorough baggage check, we got to the international terminal in the seaport city of Arica. Luckily, the national terminal is only across the street. Our worries about that it will not be easy to get to Santiago, proved partially true. The holidays coming to an end and the concert of U2 caused that all lines were sold off and unfortunately overpriced as well. So we quickly bought tickets at least to Iquique which was five hours faraway. We adjusted our watch by two hours backwards and headed for a short sightseeing of Arica.

Within few hours we rushed through the city centre, including the church and the old aduana (customs house) designed by Gustave Eiffel. Than we clambered up to El Morro 139m high rock looming above the city and offering a perfect outlook and visit of a war museum. 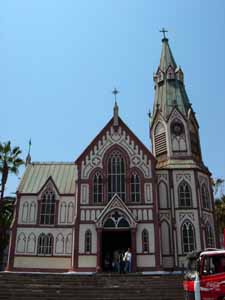 Arrival at Iquique, whose name comes from the Aymara language and means sleepy or idle, was exquisite. The huge sand dune dressing above the city was marvellously illuminated by the setting sun. Next to the central market we came across a perfect hostel San Francisco at only 7000 pesos for a double. We went out immediately to shop for the transport to Calama. We had the intention to make the last stop in Chuquicamata where there is one of the biggest open-pit mines in the world (exploiting copper). But what a surprise when we found out that it was late even for the simple transfer to Santiago. We were supposed to fly back home on Monday evening and renowned coach companies like Pullman or TurBus had already been sold out until Monday. At the Carmelita agency we eventually made one lady to book for us some of the last tickets for Friday. That meant to spend another two days in Iquique and after 24 hours in the coach (1853 km) finally arrive at Santiago on Saturday evening. This hoot came at a price of 56000 pesos (almost 100 euros)! 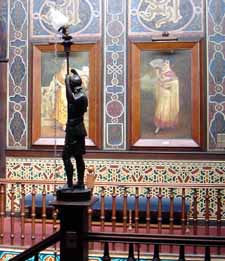 Iquique is an airy and pleasant city that has been putting a lot of effort in recent years into attracting tourist crowd. It is visible in a beautifully refurbished pedestrian zone, historical tramway, free-of-charge museum and other things. But it is the imposing colonial architecture that dominates the city centre. The pedestrian zone us lined on both sides with great wooden houses and it keeps the atmosphere of the end of the 19th century. In contrast to the city centre the seaside area is built-up by modern concrete-and-glass multi-storey houses. 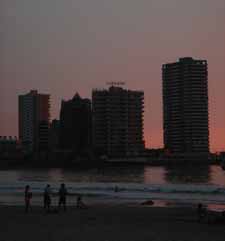 Similarly to La Paz, the quarter going through the biggest population and building boom is the highly situated Alto Hospicio. It is obviously the quarter of the poorer part of the population that cannot afford the costly downtown life.

We hadnt had many coins left in our pockets and that was why we couldnt make any excursion to the citys surroundings. To kill the time off before departure, we had to take advantage of the hostel satellite TV and watch a couple of cheap American movies. In Santiago we instinctively headed straight to the El Caribe hostels labyrinth of corridors.