We avoided the tasting of pisco for quite a while, although not intentionally. We just didn’t want to water down our strengths, so when we sat down at a pub for a moment we focused exclusively on the consummation of beerJ. After Armando had made the introduction for us during our bumpy ride through the Bolivian altiplano to the protracted dispute between Peru and Chile over pisco and its origin, we couldn’t resist any longer and decided to make just a little taste comparison. Martin took a taste of pisco already in the course of his first trip to South America – Chile 2003. But he didn’t study its history then and thus didn’t have a clue about passions that this traditional alcoholic drink is fanning between the two neighbouring countries.

Pisco is a brandy, aguardiente in Spanish if you want, distilled from white grapes cultivated in two South American regions: around the city of Pisco in Peru and in the Valley of Elquí river in central Chile. The Valley of Elquí is sometimes nicknamed “piscozone”. Thanks to its favourable climatic and geographical conditions it is the only pisco-producing region in Chile. 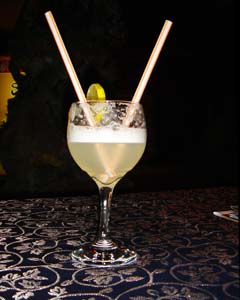 Our test was more then simple. In a restaurant in Peruvian Puno by the Titicaca Lake we ordered the Pisco Sour cocktail. It is made with a shot of pisco, a sprinkle of sugar, a bit of egg white and a splash of lime juice, then either blended or served over crushed ice, with a dash of bitters. It tasted really marvellous. If only it hadn’t been more expensive than a whole four-course menu!

We bought Chilean pisco before departure from Santiago and the tasting took place only back at home. We tried it neat. The tested version had 35 per cent. The flavour cannot be compared to anything but it is nothing “for girls”. It has neither sweetish nor any other taste but is rather unpleasant. The after-taste will not delight either. For sure, next time we will rather get back to the cocktail version, which smacks great.

The word “pisco” comes from kechua language and its real meaning is still subject to guesswork. Some claim that it means “little bird” while others say that it means “baked clay jar” in which the Kechua stored their favourite drink called chicha. Pisco has been popular for ages and both Chile and Peru consider it their national drink. Tradition and national proud are also behind the long-lasting dispute over who has the right to use the name pisco.

The question of ownership is based on the fact that pisco was produced for the first time on the territory of Spanish viceroyalty of Peru in the 16th century. The territory where pisco is produced these days was then part of one state entity controlled from Lima. There was obviously no problem in transferring production or establishing new vineyards throughout this territory. Everything changed with the Pacific war (1879 – 1884) between Chile on one side and Peru with Bolivia on the other. Chile won and annexed to its territory a couple of new provinces with rich nitrate deposits and also the province of Tarapaca where grapes for the production of pisco were cultivated.

Peru requests recognition of the trademark ownership mainly on historical grounds claiming that pisco comes from Peru and it is only there where it is produced in the traditional way. It maintains also that Chile literally stole the pisco production in the course of the Pacific war and thus cannot advertise it as Chilean nation product. Chile for its part declares that its extensive pro-export and marketing policy made pisco well known in the world and that’s why the truly world’s favourite brand is the Chilean version of this drink. Both countries come up with a range of regulations in order to protect their production. Peru tried to have its trademark recognized by international agreements and put forward a request for international registration of pisco as a Peruvian product to the World Intellectual Property Organization (WIPO). However, legal disputes have been dragging on until now.

Many today’s large-scale producers use modern technologies (pressure machines) but in plenty of smaller distilleries, which are to be found mainly in Peru, the grapes are still pressed by treading. The basic differences are in grapes, manufacturing process, the time needed for maturing in bottles or casks and, not in the last place, there is a difference in the alcohol content and flavour of the two versions. There is usually more alcohol in the Peruvian pisco (from 38%), while in Chile you can have a pisco already with around 30%.

According to our experience, which is in no way impressive, there’s no better or worse version. As we have said – our preference is Pisco Sour cocktail. Not neat but tasting great!