Touching the water not allowed! 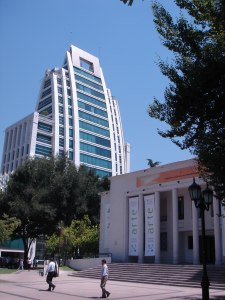 After few moments in the atmospheric El Caribe we submerged into nocturnal Santiago. Thirsty and starving we began to search for a meal of the poor at about 10 p.m. "Churasco a lo Pobre" consists of about a kilo of meat, French fries, eggs, onion, sausage etc. While enjoying the food we were pleased by the screaming of flamed out football fans.

The following day was spent on a visit to the luxury quarter of Las Condes - full of skyscrapers, broad "avenidas", business men and blonde Chilenitas. We offloaded a decent part of our luggage at the Czech embassy and picked up the permit for hiking in the region bordering with Argentina. We appreciated that our embassy staff had the permit ready for us. 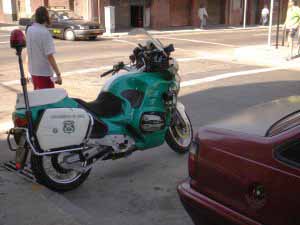 We spent another day strolling in the streets and sightseeing. The rules of conduct in the premises of the Presidential Palace were so tough that when attempting to refresh hands in a fountain (it was 36 degrees in the shade) we had a police officer (carabinera) immediately by our side. She gave us a bilingual lesson that it was prohibited to touch the water. So we splashed ourselves with two one-litre bottles of Escudo in the Bellavista quarter.

We spent the night in the bus and after 11 hours woke up in Copiapďż˝ The town is small, dry, hot and ugly. We called at the local information office and obtained another permit - this time for Ojos del Salado. 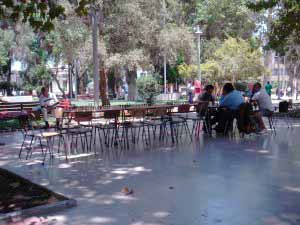 We got the permit form Aventurismo agency but before paying the 160 US dollars per person we asked about the transport. The price was a complete knock-out! 300 dollars there and 500 dollars for the backwards journey! We were not better off at other agencies - price for a roundtrip didn't fall below 750 dollars. The price would have been considerably lower if the costs could have been pooled but there were no other "andinistas" in sight. This was another serious blow to our expedition or rather its crash and the morale fell below zero.

We decided for lower mountains ascents. We committed ourselves by the slogan: "At least one 6000m summit!"

We had to improvise after the failure of our plans. Eva and Milena should be joining us in Copiapo already on 3 February, the visit to El Paranal observatory was scheduled for the 2 February. This would mean going in circles - that's why we chose an unexpected option: southbound backtrack to La Serena. 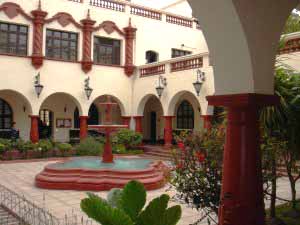 It was just about midnight when we found ourselves in La Serena. We stay in the Residencial San Juan. The second oldest Chilean city gave us the chance to lift our spirits and get motivated again. Vladimir visited the Mamalluca observatory - they took him for a southern sky ride (www.mamalluca.org).

We had a look at the local pacific beach with huge waves and ban on swimming. Our white colour unexpectedly attracts more sunrays than one would say and is thus giving way to red