One of the good things about travel is that you meet a lot of interesting people of which you have nice memories. It is amazing that even a brief encounter can finally grow into a long-lasting friendship. Actually, one of the main reasons why we dont go for organized tours or travel in a bigger bunch of people is that we want to avoid being closed off in one community. We want to use local language as much as possible, talk to the locals as well as to fellow travellers that we meet on the road.

At the very beginning of our trip, during an unplanned stop-over in Madrid, we were sitting at the computer to complain home about how we got stuck already in Europe. Booted in duplex boots and trying to type something we spotted a chap in especially fancy duplex boots passing by. We started chatting right away. Our goal was exactly the same Aconcagua.

Arians intention was to climb up Aconcagua completely on his own! Upon arrival in South America he didnt push it to the extremes like we did (by taking a night bus) and rather relaxed in Santiago and took a regular flight to Mendoza the following morning. He didnt underestimate the logistics in any way. He told us that the planning and sponsor-hunting took him a couple of months. In Mendoza he had it all arranged in advance accommodation in Campo Base Hostal, transfer and overnight in Penitentes, mules, as well as catering in the camps of Confluencia and Plaza de Mulas. He didnt leave it to hazard at all. He even managed to get his reserves of quality dehydrated food for the climb from Plaza de Mulas to the summit through the customs control at the Santiago airport. 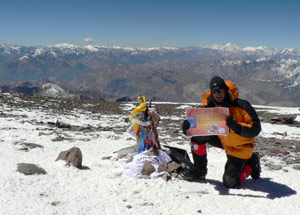 We continued jointly from Mendoza up to the base camp. Arian was in unbelievable condition. During the climb to Cerro Bonete (5004) he literally ran up to the summit in less than two hours while we took twice as much time to make it. He was waiting for us up there, still in perfect mood and cheering us up all the time. We split only on the way to Aconcagua in Campo Alaska (5200m), which was where Vladimir called it a day as the last one from the two of us. Arian reached his dreamt-of la cumbre on 26 January, 11:30 hrs.

In the meantime we learned about other hills he conquered El Plomo (5430m) and Tupungato volcano (6550m) that is referred to by some sources as the highest active volcano on Earth. Last eruption was recorded in 1986!

Towards the end of our trip we were thinking together about trying to climb up Ojos del Salado. In three people we could have pooled our load better but Arian did have to leave unexpectedly for his home France.

For more information about Arians ascent go to: www.arianlemal.com 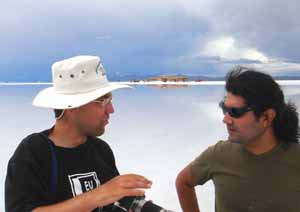 We met Armando and his girlfriend Stephanie in San Pedro de Atacama. It was when we were boarding a bus bound for the Chilean-Bolivian border crossing point Hito Cajďż˝ from where we began our journey through Bolivian altiplano. When it came to the make-up of six-people jeep crews we chose the same old Toyota and had a three-day trip to Uyuni ahead of us.

The first night at Laguna Colorada we decided with Vladimir to take a hike to a near hill, so as to get some exercise and have the opportunity to observe the magnificent southern sky away from lights. When we came back and the camp was silent, Vladimir caught a glimpse of Armando playing a tiny travel electric guitar. We were fascinated by it and started to clamour for the chance to try it out. 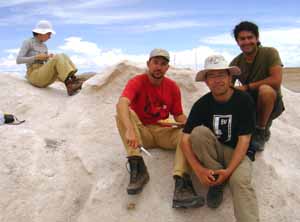 From what we learned later on, Armando is a Salvadorian pop-star. He issued a couple of solo albums from which he gave us the latest one, LEYENDA. We would have never believed that a chap with a career in full swing would take the trouble and wear along with us in a dingy jeep and sleep in cheap hostels. Armando is a very frank and cordial guy. We had a lot of fun and learned many things from him too. He made us acquainted with local culture and way of life. When walking about the Salar de Uyuni we were joking together that this barren godforsaken plane is as big as half of Salvador with a seven-million population cramped in just 21.040 square kilometres.

Our paths split in Uyuni. Armando and Stephanie headed for Potosďż˝ But we happened to meet again after a couple of days in Copacabana near Titicaca Lake. The world is small and Bolivia especially!