After the previous climb by nearly 700 metres, we have put in rather a milder dose for Sunday (January 13). From El Salto (4200 m) to the camp Hoyada (4600 m). The climb is quite short, but gets relatively steep at the end. It still was quite a heavy job with the backpacks. When we met up in the camp, I had moments of genuine “reel” and headaches. Vlada and Aleš were fine. 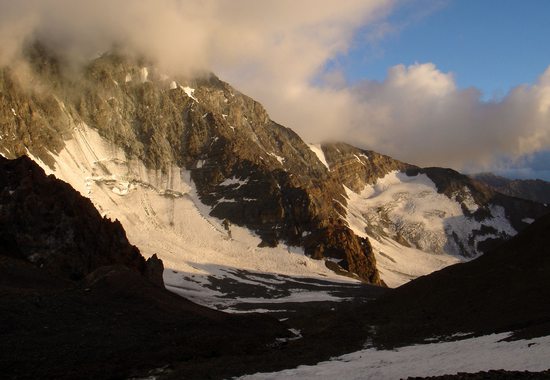 To better cope with the altitude planned for overnight stay we made it to a nearby saddle at 4850 metres. While squatting for drinks and biscuits we had chat with the folks who were already on their way down, just to learn some hints on our planned summits. At one point, a total “natural man” appeared (the kind who struts through the mountains as if he walked around the city) - in sneakers, nylon jacket and some sort of turban on his head. He was just returning from the highest peak of the whole area - Cerro Plata (6000 m). He looked quite miserable and only uttered in his broken English: “If I had known it, I would not have gone up there”. It took him seven hours upwards – endless sweat. Weather in the camp is not ideal. The valley is filled with clouds, it’s piercing cold wet with occasional showers. We’ll see in the morning.

We completely ignore the alarm at 6:00, as well as the backup at 6:30. We get up slightly after seven, being totally alone in Hoyada (4600 m) by this time. No other tent. Everyone starts the top climb only from El Salto. Light oat flakes for breakfast and start. Everything is fine through the first saddle at 4800 up to the second one at 5100 metres. However, after a rather long discussion Aleš convinced us that if we are here, it’s just because we want to climb up the Cerro Plata.

The first problems occur shortly after that. Roughly at 5200 metres and as usual, my guts come to play. Vlada and Aleš are waiting for me, while I suffer just below a snow field, exposed to the merciless wind. After ten minutes we carry further on. But it doesn’t take too long and at about 5500 metres it’s not only me but Vlada too at the end of his tether. We’ve got a harsh headache. Aleš is absolutely incredible, he keeps going. He just drinks a drop of water every now and then, but basically does not stop at all – holding the same slow pace. Vlada and I take pills of Brufen. The pain is simply unbearable. Due to the clouds we have no idea how much remains. I slow down and start to put up with the fact that I am going to miss yet another six-thousander. Boys are about fifty metres further on….But suddenly, I can see them waving their arms. It's true. They're on top! In five minutes I’m there too. It's beautiful, relieve...All the headache is gone. 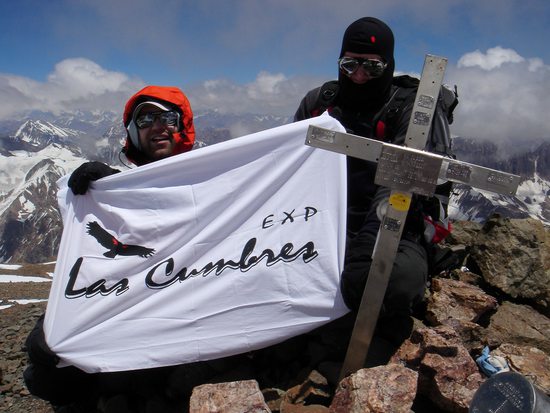 It took us only six hours to do those 1400 metres! A real satisfaction. Only the weather down in the camp is appalling. Fog, rain, cold and damp everywhere, including sleeping bags. To sum up the weather: above 5000 sunny and windy and below it just rain and fog.

The next day we are very lazy, but we know that we need another walk. We set off only before noon and head for a saddle at 5100 metres to spend there at least a while. We are up there at incredible speed and without any problems. What did take us two hours the day before, shrank to just one today! We look around and finally decide to try out the climb to Cerro Vallecitos (5550 m).

As always, Aleš is much ahead of us. In less than three hours from Hoyada camp (4600 m), the three of us are just beneath the rocky peak. Remain ten metres of three-grade climbing and balancing around the bloody exposed top cross. The mood is absolutely relaxed. In the distance we can already see the ultimate goal of our expedition – the mighty Aconcagua. It seems as if we were not even at the height of it’s heels. Magnificent. On one side of the Vallecitos mountain it’s beautifully sunny and just one metre on the other it’s boiling milk and visibility just zero. So now back to the wet, cold and dampish sleeping bags. We decide to get down to the lower camp, El Salto (4200), on the very day. The weather there is all the same, just more windy.

Beautiful morning sunshine. The valley, though, is still full of dense white clouds, but we don’t mind that for the time being. We sun-dry our stuff and get the bags ready for the descent to the Vallecitos hamlet (2890 m) via the Veguitas camp (3150 m). In the meantime the last remnants of clouds disappeared and so after eight days we can indulge in a well deserved bath in the icy mountain stream. Shower in Mendoza will not be bad, the smell in the tent just began to be unbearable. After 3 p. m. we are down at the parking lot. The only thing we have in minds is beer and the huge steaks in Mendoza.

So, now Mendoza and gearing up for Aconcagua.