Not a bad start

As already mentioned, the departure for Aconcagua on Friday 18 January 2008 was a bit hectic. No sleep, too much “liquids” and a lot of heavy bags that we had to get on the bus and manage to get off at a point where the coach is not supposed to stop! Hostel Independencia receptionist called us a taxi. We stuffed all our gear inside and set off for the bus terminal. The EUSA company coach (Expreso Uspallata) took us on board without any difficulties, including our bulky luggage. For a very affordable price of 15 pesos per person we left shortly after 6 a.m. for a four-hour ride to Los Puquios, headquarters of the Aconcagua Trek Agency (owned by Rudy Para). 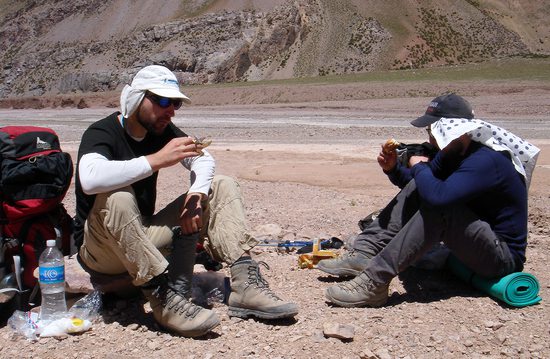 Right on the bus we met with another Italian - Fabrizio. That he spoke only Italian was not a problem. According to what he was saying, he had a light acclimatization on the Mont Blanc and was determined to have a "solo" go on Aconcagua by one of the very bold routes - the so called directisima on the Polish glacier. Manuel was waiting for us in Los Puquios. To our surprise he didn’t turn a blind eye on the kilos by which our luggage exceeded the agreed 60-kg limit, and so we were “upgraded” to a higher weight category. A mule carrying 60-kg load to the base camp at Plaza Argentina goes for $ 220. The upper category is up to 90 kg and comes at $ 290. It was clear that there was no chance to get it down to 60 kg, so we tried to pull as much stuff as possible out of our backpacks and put it on the mule. Finally, the total weight of our luggage carried by the mule to the base camp, reached 78 kilograms. Around 1 p.m. Manuel showed us to the nearby Punta de Vacas, where we started out.

We put on a “50+” sun factor and set off in burning heat. The objective for the first day is the ranger station in Las Lenas (2800 m). According to all assumptions we were supposed to spend a pleasant 4–5 hours-long walk through beautiful countryside along the Río de las Vacas. As it turned out, it was the first of a whole series of surprises - everything will always be at least two times farther than we imagined, and much higher and bigger than we expected! 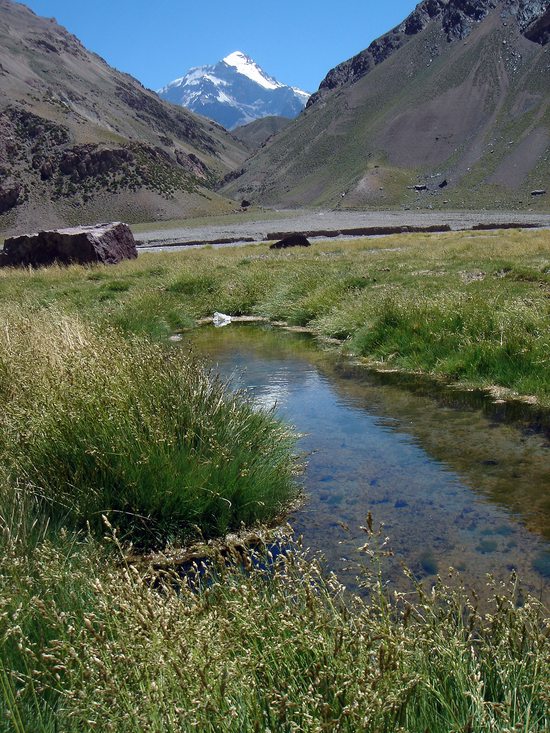 The countryside around is is truly beautiful and more diverse than in the arid Horcones Valley on the conventional access route – so called “Normal Route”. Abundance of green, high-grown poplar trees and lizards basking in the sun on the rocks along the river. A walk through the valley, however, lasted six and a half endless hours on uncomfortable, shaky stones. Fabrizio joined us half-way. The distance to the camp seemed just endless. Refugio Las Lenas is the gateway to the Aconcagua National Park when going through the Vacas Valley. The necessary formalities include checking of our permission to enter the park with the view of climbing up Aconcagua (bought in Mendoza for $ 320) and allocation of numbered plastic waste bags. We went to sleep right after that.

Beyond the next bend

For the march to another camp Casa de Piedra (3200 m), we set off early in the morning along with 15 other colleagues, mostly American. We had quite a good fun as we watched them jumping headlong into the river and fording it in places where it was not necessary at all. They were making exactly the same errors, exhausting them unnecessarily – just like we did with Vlada two years ago when we first attempted Aconcagua using the "Normal Route". We enjoyed the second day of march through the Vacas valley much more and were in rather relaxed mood. Just before the Casa de Piedra camp, we were allowed to see Aconcagua for the first time. A beautiful sight – first, Ameghino Mountain (5883 m) appeared and the eastern wall of Aconcagua (6962 m) right after it, including the glittering Polish glacier.

Camp Casa de Piedra (3200 m) lies at the intersection of two valleys. The first is the Vacas Valley and the second, through which we were about to hike the next morning, is Valley of the river Relincho. Faithfull to its name, Casa de Piedra is really glued to a large boulder. Local gauchos built it for their purposes. We felt rather scary about the third day. First, we had to cross the river Vacas at the very beginning and then gain some 1000 altitude metres, so as to reach the base camp Plaza Argentina (4200 m). Almost with no exception, all of our American colleagues paid and had them transported on mules´ backs over the icy river arms. Not Fabrizio and us. We took off shoes and socks, pulled the trousers up above our knees and stepped into the unknown waters. Ales literally ran across the 400m stretch with a maximum dive somewhere above half of his thighs. Completely frozen and not feeling legs down his knees he sat on a stone on the opposite bank. We have long debated how to do it without pain. Impossible. After a few seconds, we could feel nothing but terrible burning, each stone cutting deep into frozen meat. After crossing we exposed our legs to the morning sun for nearly an hour and could continue afterwards. 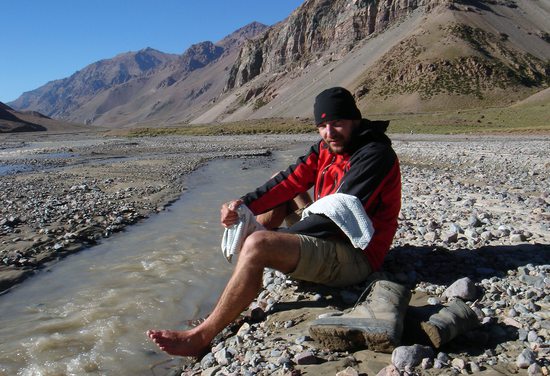 Going up was just endless. At one moment, as we stopped to shoot a mule caravan on its way to Plaza Argentina, one of the gauchos started to yell “Mochila, mochila”! First, we stared at him blankly. But it was Ales’ backpack which disappeared somewhere in the depths of the valley. While taking pictures Ales brushed against his bag and sent it for a nice flight down the valley. One of the gauchos immediately set off and was soon back with the backpack intact. Even all the gadgets were ok, mobile phones, GPS etc. It was a lesson, though. Should it happen a bit higher up, it wouldn’t have been so funny. 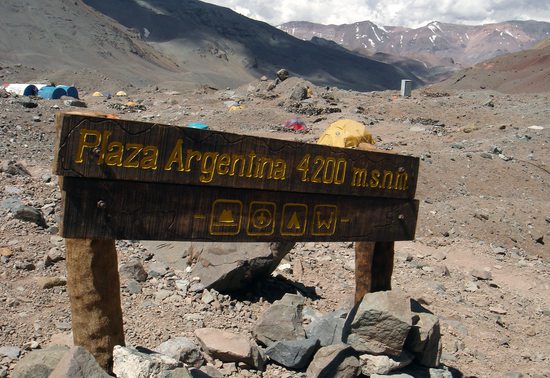 The only annoying thing for the rest of the trip were the ubiquitous huge mosquitoes, rising wind and countless bends. The camp was supposed to emerge at any moment. But there was no sign of it and every other turn was raising just vain hopes. After an endless day and countless bends we reached Plaza Argentina (4200 m). We quickly checked-in at Rangers Stations and received our shit-bags, since there are no toilets above the base camp.

On the morning, Monday 21 January, we were woken up by roaring helicopter. We thought they were going to evacuate someone suffering from pulmonary or brain oedema. Instead, the helicopter was taking away the barrels with human waste from all latrines all over the vast camp. I decided to take a close-up video of this operation. But the wind generated by the helicopter was so strong that I made only one picture and then just went back to our tent, so that it doesn’t fly away too. After the machine departed, a paraglider appeared just next to Aconcagua! Amazing sight. Up there in almost 7000 metres there must have been a terrible cold, especially in the morning. But the guy not only survived but managed to land smoothly near the camp!

The entire day we just rested. We successfully tried to eat up as much as possible from the heavy cans (fruit, vegetables), so that we go up only with light dried foodstuffs. At about 17 hours Aconcagua suddenly disappeared in clouds, temperature fell sharply and it began to snow. One day before moving up to the higher camp it was not a great encouragement.

Unlike the other climbers at the camp, we decided not to do any “carry-ups” in advance and carry all the gear right on our backs up to the summit. We will go over the top of Aconcagua and then go down via the other - western - side, to the Plaza de Mulas camp (4300 m). There’s nothing like having a good plan and strong self-confidence! We will do it in a classic alpine style. The only thing is to carefully consider what to take up – a bear minimum of food and material - be as light and thus as fast as possible. We took the stuff for the glacier (rope, screws, harnesses, ...), and food for only four days, plus two days reserve. Mainly the very light bags with powdered foods full of "healthy food additives”. 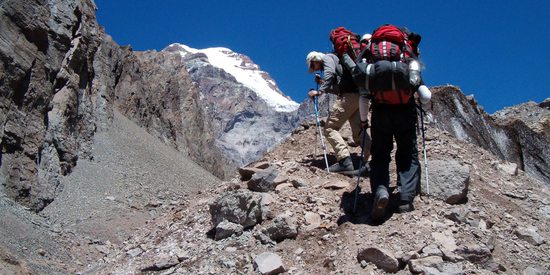 We set off early in the morning but reached the first altitude camp (4850 m) only in an unpleasant afternoon weather. Temperature below zero. Very, very strong wind and snowfall. Bad luck. Everyone we met was talking about the perfect weather during the previous two weeks – clear sky, fine temperature and basking in the sun!

The summary of the first day of real climb was rather bad – going up with heavy backpacks was incredibly exhausting – so after that even such basic things like going pee required a lot of effort. This simply wasn’t the best start ...