Luis Viracocha on poetry of stone

When he was four and a half he got his first gift from his daddy – chisel, hammer and stone. That was the very day he set off for a long journey of a sculptor’s quest for the soul and essence of stone.

In the Viracocha family, love for stone passes from one generation to the other ... granddad was sculptor, father as well. Apart from education at schools of art in Ecuador, Luis studied restoration and sculpture in Italy. 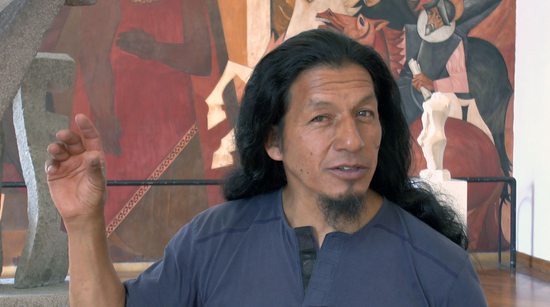 Nowadays in his fifties, the windswept artist continues to work hard so that other people can enjoy the poetry of stone that he is feeling so strongly. In June 2012 in Quito (at the premises of Casa de la Cultura Ecuatoriana) he inaugurated his exhibit named „Todo en el vacío“. Thanks to many lucky coincidences we could meet and briefly talk to him. Not only about the exhibition itself, but also about inspiration, searching for stones in the Amazonian jungle, the risk of silicosis and the Ecuadorian volcanoes.

At the „Todo ne el vacío“ display the public could admire pieces of work made of black and white marble, stone (andesite, serpentine) and different metals.

Does the name Viracocha ring you a bell? You have certainly read about the Incas, their culture and religion – Viracocha ranks high in the Incan pantheon…

Viracocha (Wiracocha, Apu Qun Tiqsi Wiraqutra, also referred to as Con-Tici Viracicha) was the great creator god. He was one of the most important deities, considered as the creator of all things or the substance from which everything is made. This god created the universe, the sun, moon and stars, time and civilization itself. Viracocha was worshipped as god of the sun and of storms. As such, he was depicted wearing the sun for a crown, with thunderbolts in his hands.