It all began with the trip to Chile in early 2003. We spent there six wonderful weeks and traveled it from north to south. We were attracted mainly by Chile´s legendary diversity of nature – something you don’t find in many countries around the globe. We came primarily to see the wonders of nature but very soon we found that Chile, it means above all wonderful people who helped us, advised or joined in for a night ride. This first trip made such an impression on us that since then we keep coming back to South American countries and still continue to be charmed by the wonderful folks and amazing sceneries.

Chile is geographically an extremely diverse country, thus making it a perfect magnet for tourists from around the world. Bordered by the Pacific one side and the 6000m peaks of the Andes on the other it stretches from the subtropics to the polar region.

In the north, in the Atacama desert (considered driest in the world), the main limiting factor are the long distances. They can be overcome easily (with enough fuel) thanks to the well known Pan-American highway (Ruta 5) which gets you up to the arid regions of the Norte Chico and Norte Grande, regions full of colorful rocks and canyons dominated by the rugged heights of Altiplano.

Central area of Chile is characterized by beautiful lakes with snowy volcanoes on the backdrop. Further down to the south the drive gets more difficult. From the island of Chiloé the terrain gets so rugged and population sparse that up until now it has not been worth building a paved road. Still, the South of Chile counts between the most attractive and most popular areas. National Parks, with the world famous Torres del Paine, glaciers, steep rock towers, mountain lakes, waterfalls or penguins and other wildlife must delight any lover of nature.

In a series of articles based on our detailed travel diary we take you first to the Lauca National Park, sitting on the heights of Chilean Altiplano. Its rugged landscape is dominated by the famous volcanic twins (Payachatas) of Pomerape (6282m) and Parinacota (6348m) and herds of grazing llamas. But Chile is not just one big national park, it offers unique attractions of technical nature too. You’ll have a look into one of the world’s largest copper mines and will read about the remains of saltpeter mining in Atacama, which once was the largest source of Chile's wealth. During our travel we realized that the biggest surprise for us were the locals – we arrived with the idea of not meeting many, spending most of the time in the remote mountains and taking time out of people. In our articles from Valparaiso and Santiago we insist that Chile is first of all a „terre des hommes“. A journey to Chile would obviously not be complete without going down to Patagonia – we offer a description of the classic trek around Torres del Paine. We’ll see what Punta Arenas and its surroundings can offer and symbolically enter the Tierra del Fuego. A visit to the unique Conguillío national park in central Chile will remind you of Jurassic Park. And you will take away a completely different impression if you visit with us the island of Chiloé with its wooden churches and rural way of life.

We shall just add that this successful trip was the very impetus for our unfailing interest in Latin America that eventually lead to the emergence of www.cumbres.cz. Entonces, no te pierdas el ahora y prepara tu viaje! 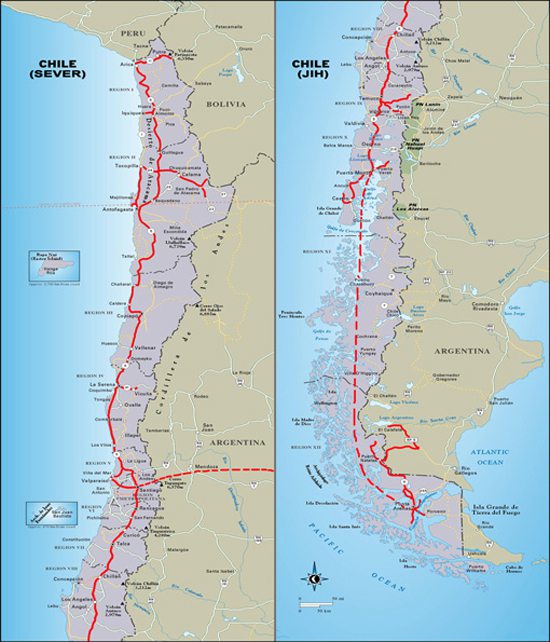 Our route is marked red

The above map with marked route is complimented by the timeline in table form. More details can be found in other sections of this site, especially in the DIARY of the expedition.