First, one should say that we spent an excellent acclimatization in the Cordón del Plata region. We slept a couple of days in altitudes above 4000m and made it to the highest peaks of this mountain range - Cerro Plata (6000m) and Vallecitos (5550m). 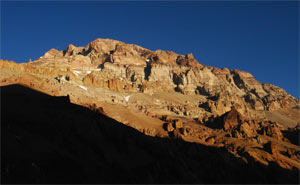 It has been two years since we tried unsuccessfully to ascent Aconcagua (6962m). This time we opted for a different access path - other than the so called „Normal Route“.

Our base camp at the foot of the mountain is the one called Argentina in 4200m. We did reach it after a three-day painful march through the Vacas and Relincho valleys. Our gear brought over by a mule was waiting for us. At dusk the weather gets worse with gathering clouds and snowing arriving from the heights. We slot in a day off. Weather is fine until three p.m., after that it is the same as the day before. Night temperatures fall down to around minus five.

Another camp is called Camp 1 (4850m). We set out around noon, since one can hardly do anything until the sun appears because it’s too cold and windy. Altitude difference of 800m gives us a hard time. The weather gets worse as we arrive to Camp 1. Pitching the tent, cooking. We dreamt about having not more than 20-kg-backpacks – in reality it’s rather around 25kg. We carry food for 6 – 7 days. 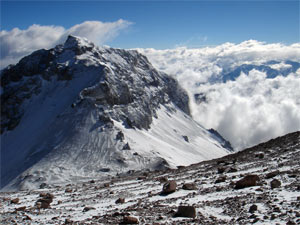 The temperature in the night falls down to -10°C. Strong wind and snowing – I’m happy to have my earplugs that help to damp the slatting and thunder produced by the tent cloth. In the morning we want to carry on to Camp 2 (5850m). We get to Ameghino Col Camp (5350m) placed in the saddle between Aconcagua and Ameghino peak. As we realize that it’s still some 500 metres we decide to pitch our tent behind an improvised wall, joining another three neighbours.

While we are having rest, the leader of an American group rushes in yelling how could we, idiots, pitch our tent so close to theirs, not to mention that he himself had built the wall – He who had been to K2! As he began hastily to move his tent, we say to ourselves it’s too much and we climb up a bit to another “halfcamp” in 5600m. There’s also a protective wall and running water just a few steps away. This camp is not protected enough, so in the night we are being slashed by heavy wind and have to re-adjust the tent-fixing strands.

The following day we crawl to the Camp 2, which is fairly large with quite a few tents scattered around. Water can be had from little pools. First you have to use an ice axe to make a hole in a 10cm-thick ice. We left our petrol-burning stove in the base camp because it was too slow in boiling water (two litres in about 20 minutes), and too heavy as well. That’s why we were slightly afraid as to how to obtain water, since we didn’t have enough gas to melt the ice.

As always, the weather got worse over night with 10cm of fresh snow in the morning. During the night it gets down to -16°C in our tent. In the morning we have to scratch with spoons a frost layer on the inner side of the tent, otherwise everything would be damp. Anyhow, our sleeping bags are far from being completely dry after night. I sleep in three pairs of trousers and I virtually put on everything I have, moreover covered by a down jacket. Camp 2 is on the Polish glacier moraine, so you sleep on ice a can hear its occasional creaking. 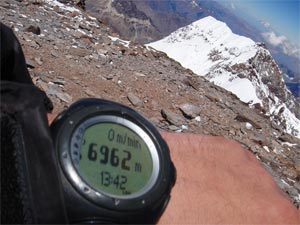 There’s not much to do during daytime, we sit back and relax, weather is changeable with the summit hidden in clouds all the time. We get the weather info from those who have satellite phones. It seems that the weather will stick for some time. The following day we spend some 20 hours in a tent designed for two, so no luxury in three guys. We tend to “go to bed” at dusk, when it gets considerably colder, and get up only when the sunrays reach to our tent. In the mountain shade it can mean up to 14 hours of sleep (20h - 10h).

Next day we go to have a look at the glacier. It’s huge and steep with large plates of clear ice. Guidebooks say that it has 35°-40° inclination on our envisaged trail. It’s been three days in Camp 2 and we have to move on. We are running short of food, there’s only one-day allowance left. Holding on in this altitude doesn’t add much strength. The problem with the Polish glacier is that if one of us could not continue, which is quite likely, then all of us would have to go back and there wouldn’t be a second chance, not even by the normal trail. What also weighs in is the fact that we don’t have much experience with walks on clean ice. If one of us slipped, others would follow – and to drill fixing everywhere would be too time-consuming. So we reassess our plan and decide to traverse the mountain to the White Rocks Camp. The following day promises an ideal weather for the final attack. Our glacier equipment – everybody two ice-screws, harness, two quickdraws, prusik loops, carabiners, crampons, tourist ice axe and a 40m-dynamic rope – will not be needed as it seems. 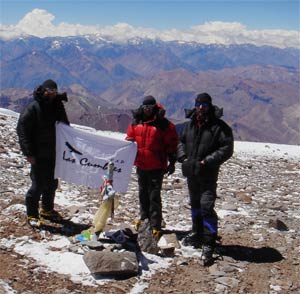 Since White Rocks is on the normal route there are dozens of trekkers waiting for the climb. In Camp 2 there are approx. 10 persons. This side of the mountain has one disadvantage – there’s no water available, from the Nido de Condores camp (5380m) onwards. We load snow to our transport bags and melt if for tomorrow’s ascent. We need about nine litres plus one litre for breakfast. Such a snow bag works like a fridge in the tent, so we have to put it outside.

Breakfast consists of a balanced mix of ready-made oat flakes and ready-made soup. Lunches come only occasionally; there are also some biscuits for snack. Dinners come in pretty much the same fashion. We add onions, garlic, potatoes and once even a piece of salami.

Wake-up call at 4 a.m. and we have to melt totally frozen snow, the result being two litres of water. We do the cooking at the entrance to the tent – it is too cold outside. The petrol-burning stove is of no use again with the flames blazing off when we try to ignite it. Our darkest fears didn’t fulfil and we had just enough of gas.

We set out at 05:30 a.m. There are already some little lights moving uphill. Shortly, we gain full speed and leave everybody trailing behind us. The pace is like that we first consider every step before actually doing it. The most important thing is not to get out of breath, not to stop too often and keep going. It’s cold (-30°C) and it blows a bit. Our toes are freezing, we have to flex them slightly after every step, sometime they bite, and sometime we cannot feel them at all. We’ve been going in the duplex shell boots already from the base camp. Face-protecting hood is a must. 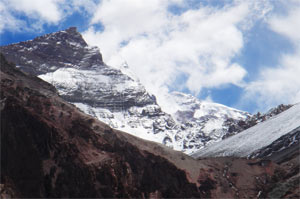 We make the first major break at the ramshackle Independencia Hut (6400m). We enjoy frozen gels and biscuits, and penetrate the frozen bottlenecks of our simple plastic bottles – the thermo-bottle would come in handy but we can do without.

The much-feared “canaleta” begins a bit after Independencia. It’s a slippery, steep slope. We enjoy it frozen and covered with snow. We had made the mistake of not putting on the crampons – digging the boot-tips into frozen snow proves to be too exhausting. So we put on crampons a few hundred metres higher and take a rest. The sun is shining, there are only 150 altitude metres left.

Driven by the vision of the summit we overburnt the pace and a few people passed ahead of us. The last metres are the slowest and we need more than 90 minutes to make it. Exhausted we crawl to the summit and enjoy the “summit euphoria”. Indispensable pictures and filming and we go back after a few dozens of minutes.

Today does not end in the White Rocks Camp. Since we have nothing to eat (it was planned like this), we pack our tent and continue downhill to Plaza de Mulas using the normal route. The long march with a heavy backpack is a hell. We buy pizza at the local shelter and sleep like a log.

In the morning we give back our “shit bags” and carry on to the Aconcagua Parc entrance. The normal route has a much shorter access part and we are back already at about 5 p.m. We check our blisters only in the bus to Mendoza...