After a small intermezzo, when our carrier almost forgot us in Mendoza we arrived at Penitentes (2500m) where we stayed overnight. 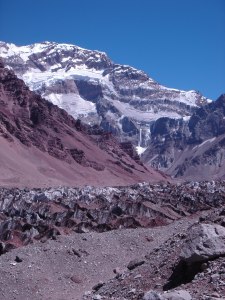 The following day, we loaded our mule with some 60 kilos of equipment and started the trek and ascent to the intermediate camp of Confluencia (3300m). We reached the camp after some four hours and pitched our tent there. Martin acquired a fine sunstroke during the day and his "air-conditioning" cold hasn't got any better. The temperatures remain high so we sweat in our warm sleeping bags.

In the morning, we go for an acclimatization trip to Plaza Francia (4300m). We are making U-turn after good four hours because of the falling stones. But we reached the required altitude, so we are content and go back. While shooting pictures, Martin's reflex camera reported "error" and refused to work any further.

The following morning, although tired from the previous-day trip, we start an incredibly long trail to the base camp Plaza de Mulas (4350m). 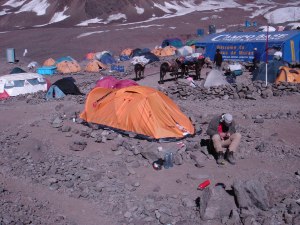 It is only Vladimir who carries the 21-kilo-backpacks, since Martin's condition still doesn't get any better. The trail is scheduled for 8 hrs and we need ten to make it - we arrive at seven p.m. It is almost six hours of a flat walk but we didn't choose the standard dry way but followed the mules instead. Because of this choice, we had to cross several 2-3-meter-wide brooks which always prove to be deeper and faster than we expected. Martin takes away another ailment - a nail almost torn off from one of his toes. Both of us have the boots completely soaked; Martin's got also his trousers sodden up to the armpits. 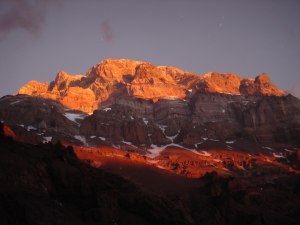 The last hours we agonize in an area called Subida Brava or Hardy Climb, since it is really a steep climb at the end of which we gain about 400 altitude metres. We are lucky enough that our French buddy, Arian, helps us to pitch the tent after the arrival. We live an uneasy night with only few hours of sleep. The altitude begins to take its due.

We've got a day-off today. We go only for a medical check and later to the Hotel Refugio (4370m). Martin suffers from a harsh headache every day for two hours. Otherwise we are feeling all right and our indicators (blood pressure, pulse and oxygenation) at the medical check fall within the limits as well. We fall asleep for a couple of hours in the day. Later, we play ping-pong in the hotel and get dinner during which Martin turned out again as a guy of bad luck, since his "lomito" looks a bit greenly and doesn't smell very nice... 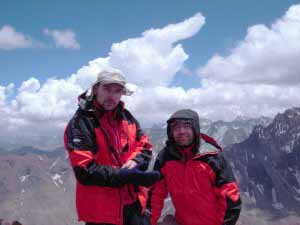 Today is devoted to the acclimatization ascent to Cerro Bonete (5004m). We reach the summit after a couple of hours totally exhausted. Unfortunately, we cannot stay not even for a few minutes because of the gathering clouds. Martin's headache comes back again after descent.

Some rest in the base camp. A shortcoming in our planning has emerged - our foodstuff is almost completely composed of pasta and canned sardines. We've been eating this since a couple of days. Several accidents happen. We can see a helicopter coming for the climbers at least three times in the day.

We wake up early and get ready to proceed to the first altitude Camp Canada (4950m). It is a fair trek and we put on the shell boots for the first time. 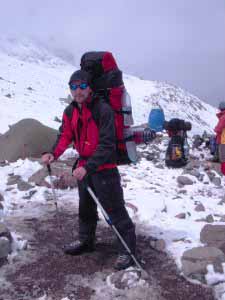 We pitch the tent and get the last supply of fresh water. It is a warm day but it changes in a few minutes. Martin is being knocked down by his headache, it is getting colder and it starts snowing. The snowing changes into a true storm and after two hours we enjoy 10cm of snow all around. Sitting back in the tent we are waiting for the morning when we want to carry on to the next altitude camp Nido de Condores (5300m). We couldn't t get out of the tent to cook something so we don't have much to eat. Our petrol cooker spouts half-metre flames when lighted up - something that our tent would certainly not appreciate very much.

I listened to the Martin's breath in the night as it was very irregular with up to 20-second pauses. The same was happening to me before I fell asleep. I must have been so anxious about it that I've barely got some sleep and in the morning I feel even more tired than in the evening. It was snowing in the night, so there's some 15-cm layer outside. Crampons are not needed however. 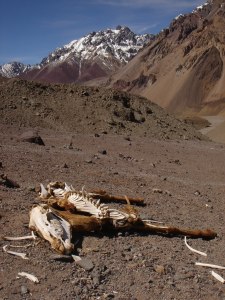 The trail is well beaten out by the crowds that are going up and down. We watch another dead body being carried down and Martin decides to descend. I want to press ahead so I have to take all the chores with me. My backpack gets inflated up to 30 kg. So we separate and I continue further only with Arian. It is snowing and there's heavy fog around. After some time I begin to suffer from pain somewhere in my belly. I reach the Alaska Camp (5200m) almost crawling and I'm trying to pull myself together. I'm vomiting slightly. I don't feel better and I decide to go back after an hour approximately. I feel frustrated and I lack the guts to push ahead. In the meantime, Martin has managed to repair his reflex camera in the base camp. We make the decision to give this up and descend.

In the morning, we load the remaining 30 kilos on our mule and go down, together with a Canadian couple. They spent three days in Nido de Condores but there was even more snow and bad weather so they did not attempt to attack the summit. It takes us eight hours to get back to the entrance of the park. We have ourselves transported back to Penitentes where we can enjoy a true dinner and sleep in normal bed ...

We pack our bags and go to Puente del Inca to buy tickets for Santiago. Departure should have been at 14:30hrs but the microbus arrives only at 16:00. The passage of the border is unbelievably complicated; there are several officers desks, a lot of paperwork and stringent baggage checks. 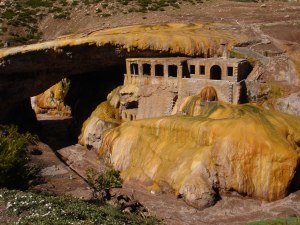 We've got some problems there due to other gringos which took our bus only to get at the border for stamps and did not want to continue beyond the crossing point. It seems that that the bureaucratic machine is not ready to handle such kind of situation. We hit Santiago at 19:00hrs and get accommodate ourselves in the hotel El Caribe that is full of charming Cuban atmosphere.